It’s been ages since I posted here. This will not be a surprise to anyone who has followed this blog for any period of time – although ‘follow’ is possibly an inappropriate word for something that moves at the speed of a particularly leisurely sloth – but is a source of constant sadness and irritation for me.

I could plead that I’m getting on with building the sim rather than the bad old days when I might work an hour or so a week on a shell that would never see the light of day, and that would be true; I’ve come a long way in the last 12 months. I have an operating and usable simulator. It’s by no means finished, and it’s by no means the last one that I will build, but it works, I can use it, and I am using it.

I’d love to promise you one update a week. In fact, I will promise you exactly that, and let’s see what happens.

Then there’s my YouTube channel, which has one video on it and about half a dozen hopeful subscribers. Making videos takes a lot more time and effort that writing blog posts, and can’t be easily done at 2am, unlike most of these scribbles. There’s been nothing new on the channel since January, although I shot a bunch of footage during the Great Screen Rebuild and the subsequent getting-things-to-work phase, and I’m hoping to put out a video about the screen rebuild and then something about single-channel vs multi-channel in Prepar3d in the not-too-distant future. I can’t, and won’t, promise any frequency of updates to the YouTube channel. I subscribe to a lot of channels that are updated daily or at least a few times a week, but those guys are doing it as a full-time thing. I have a job. And a life. Not much of one, but I do have one. And sometimes I just want to fly the sim.

Anyway… enough rambling. This is just by way of a promise that there is content to come, now that there is a sim to write content about. I just need to factor writing and shooting videos into my regular schedule. That can’t be hard, can it?

Here’s a quick shot of the sim in action, to show how far it’s come. I’ll explain the layout and function of all the screens in a future post.

…but if I did, they’d be the best updates in the world. Probably.

Seriously, though, it’s been ages since I posted here, and just as long since I posted on YouTube. You’ll have to forgive me, although this is hardly unusual in the history of this blog.

I’ve got some updates coming down the pipeline Real Soon Now, but long story short – it took me much longer than I’d intended to get done with the new screen and get the projectors mounted and aligned, but the results have been good. I did some real test flying and the display is much better than it was, not least because of the Screen Goo paint which I’ve finally applied. There are issues, which I’ll go into, but I’m working on those.

Most recently, I made a significant decision to go from a two-seat console down to a single-seat (pilots’ side) console. This was primarily so that I could get the console much closer to the screen and sit nearer the centre of it.

Details on all this and more in updates soon. Honest. In the meantime, he’s a picture of the current status quo:

It’s been a while since I posted and I thought I owed you a status update. The build of the new screen has been going slowly for reasons I’ll explain shortly, but it’s definitely progressing. Just today I put on the new screen surface. I hope to be painting by mid-week and mounting the new gantry next weekend. First light on the projectors maybe by the weekend after.

END_OF_DOCUMENT_TOKEN_TO_BE_REPLACED

I started work on my screen rebuild this weekend, but it quickly became apparent that it’s really hard to cut decent, accurate curves with a simple jigsaw and my limited cut supports and space. I really want this to work properly so I never have to consider building the screen again.

Having taken down the existing screen surface, I’ve decided that the underlying frame is itself not fit for purpose. Specifically, it’s a bit wonky. It’s the best I could do with my limited skills, but it’s just not good enough.

So (deep breath), I broke out the CAD program and drew up a set of parts for a completely new frame and screen assembly, calculated to be millimetre-perfect for the projectors that I’m using. I’ve just sent the CAD drawing off to a CNC cutting house for a quote to cut the parts. Provided it’s not super-expensive – and there’s no reason it should be – then I’ll have the parts cut and delivered to me, and from those I can build a new screen assembly and projector gantry.

I’ll update you when I know more…

UPDATE 23/01/17: I’ve commissioned a local design firm with the right CNC cutting equipment to cut the parts for me. Hopefully they’ll be ready this week. In which case, a build log will be forthcoming after the weekend… 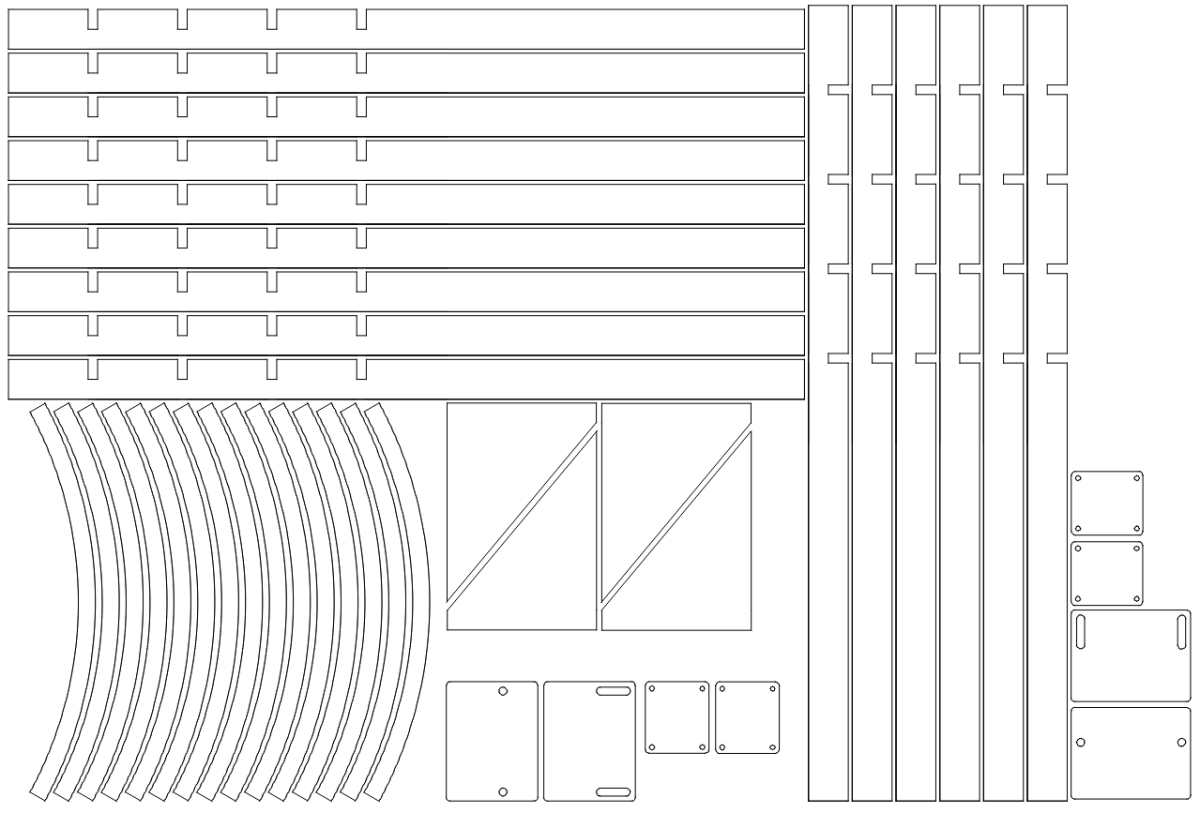 What? Am I mad? Well, maybe, but since I got the sim running I’ve been plagued with display problems and these come down to two main things:

These leave me with a sub-optimal experience and it’s only really become obvious since I started using the sim.

So – I’m going to rebuild the screen yet again, and also re-mount the projectors.

I’m going to cut four semi-circular support rings which will be mounted to the original frame and will leave a properly circular guide against which to attach the screen material. I will replace the hardboard with new board. With the continuous circular guide, rather than relying on four mounting points, the board should conform properly to the shape and have no dips and bumps. Then I’ll paint it with the long-awaited Screen Goo paint.

I’m also going to re-mount the projectors. To do this, I’m going to take down the current gantry and replace the wooden cross-bars – which, like all wood I can get from a DIY store, is warped and not completely straight – with square-section steel tubes. This will not only get me a dead straight run, but also improve the structural rigidity of the whole system.

Then I’m going to make my own projector mounts. The current mounts are meant for AV systems and are fire-and-forget – that is, you set them up and leave them; but they don’t do well being adjusted on-the-fly as I’ve been having to do, and it’s impossible to tighten then up enough to stop any movement without losing the careful positioning I’ve already done. I will replace them with my own design which will be rigid and allow for adjustment using bolts. I can get them into place and adjust them in-situ without losing the other settings I’ve made.

I’ll do a video / entry on this whole process and show you how I do it. I hope to have the sim back up and running by next week, the week after at the latest. With a stable and properly aligned visual system, the software tasks of blending the views etc should get a lot easier. 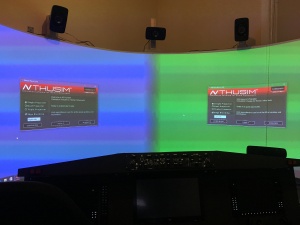 So, when I last left you – bar my recent video – I was happily building consoles and pedestals and integrating my hardware.

I decided some months ago to go down the multi-channel route with Prepar3d; using multiple PCs networked together to render my outside views, primarily for performance reasons. Standalone image-generator PCs will always out-perform a single-PC system rendering multiple outside views. Since I needed a 180 degree view and this can’t be achieved with P3D (or FSX) because of the way that the view rendering works, I would have needed multiple side-by-side sectional windows to get a full outside view.
END_OF_DOCUMENT_TOKEN_TO_BE_REPLACED