When last I left you I was about to do some re-building on the gantry that holds my twin projectors. That work is now done.

I started by taking down the existing gantry in toto – though I left the horizontal bracing that runs to the screen intact for reasons that will become obvious later. Then I took two lengths of 44mmx44mm baton and ran these along the edges of the screen from the floor to a high point of 2.4m. I removed the existing tripod legs attached to the rear of the frame at either end, and the new baton became the new legs of the tripod. This is both more elegant and, critically, more structurally sound.

Then, I took the gantry flanges and re-made them with longer arms to push the gantry further out, and re-attached the flanges to the new sides I had added, at a position about 250mm higher than before – which will mean I have to angle the projectors down more and have more keystoning, but will also increase the volume of the space I can use without interfering with the images. A calculated trade-off. 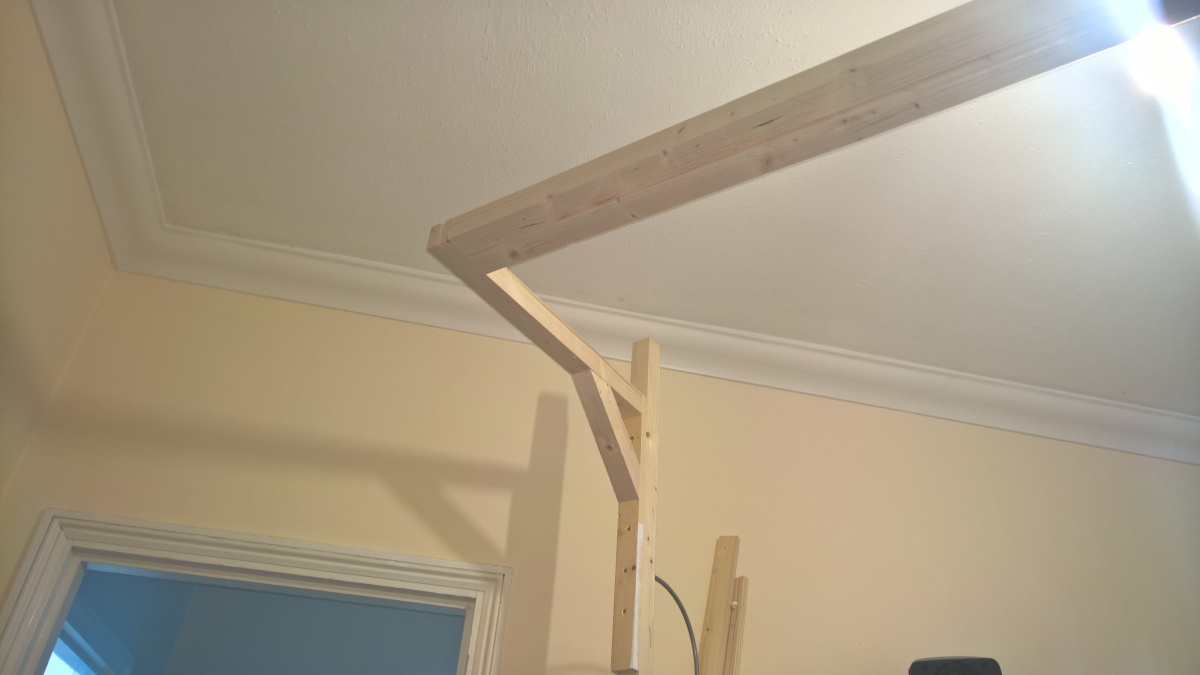 I ran two lengths of the 44×44 pine baton between the flanges to make the new gantry rail, and having done that I used the existing horizontal braces to work out the point on the rail at which each projector should be mounted. I added mounting points at each of these positions with captive bolts, and then removed the horizontal braces permanently.

This leaves me with the projectors in the right positions again, but this time not flopping about on the ends of arms, and so reducing the potential for movement and vibration significantly. Which was the goal. 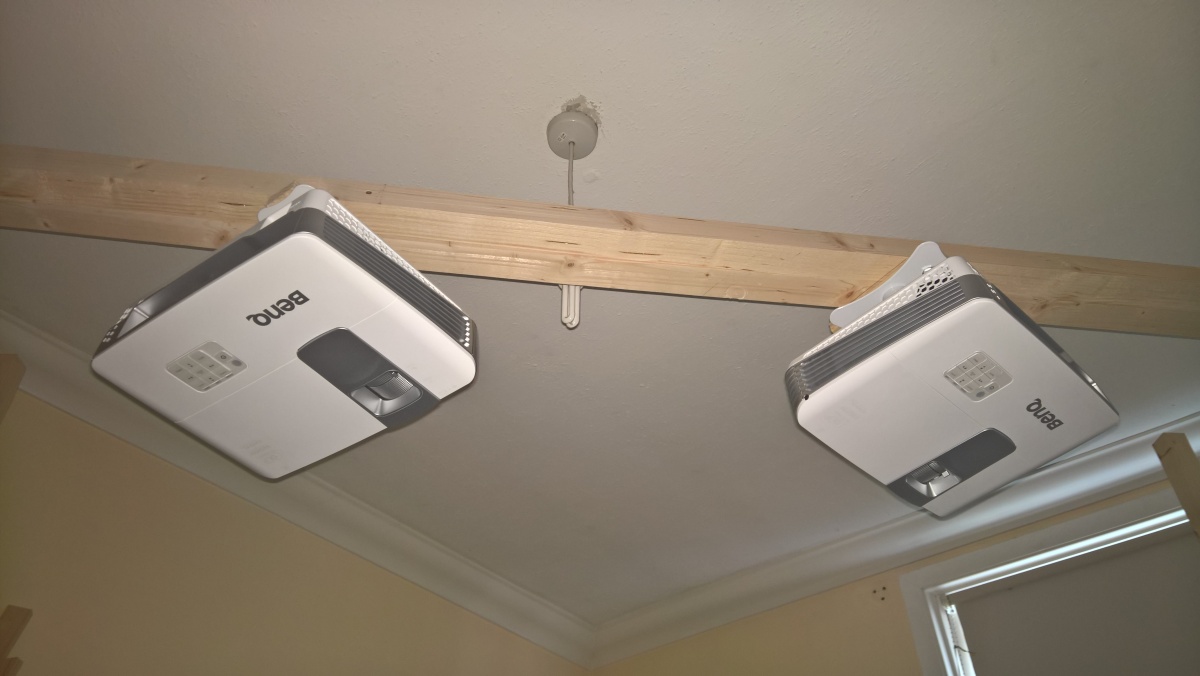 I still need to run AV cables and power back to the projectors, but for now I have moved on to working on the pedestal again.

When you saw that last, it was just a partial frame with a housing for a touch-screen. Having gotten it to the point where I could mate it with the main instrument panel, I discovered that a) I had mis-measured the height, and it was about 30mm too high, and b) that it was way too long – I would have to twist around in my chair backwards to operate any controls at the rear end of it. 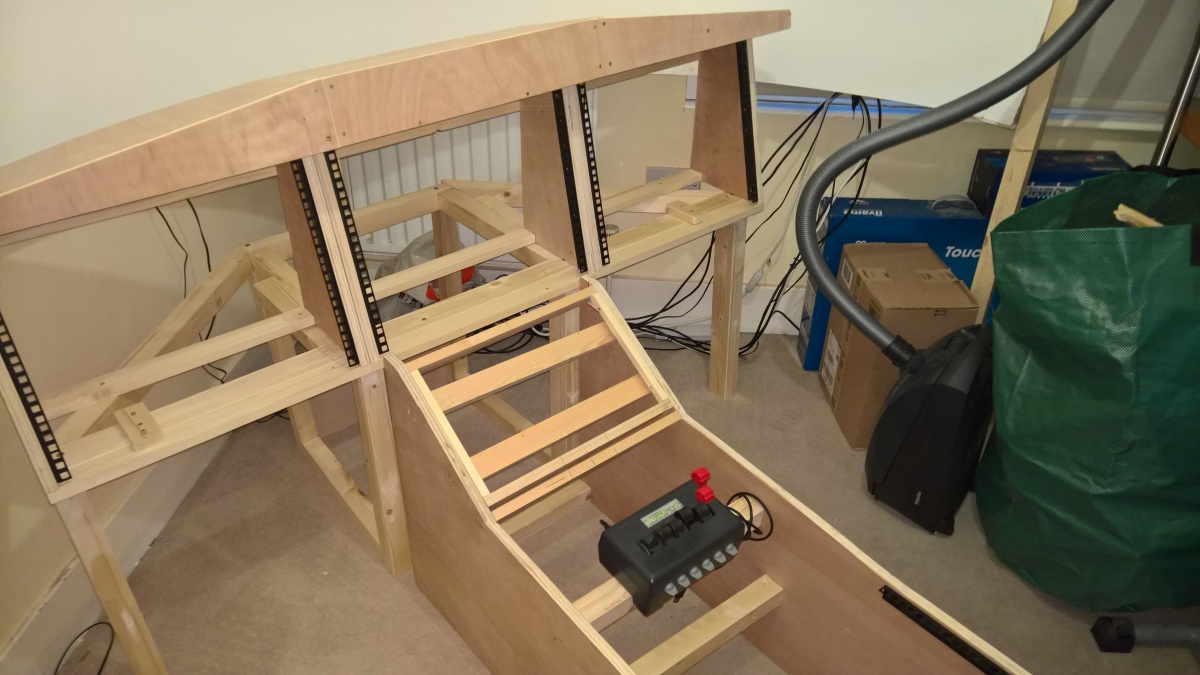 So I did some re-working. The screen section was a bit too big, and too steeply angled, and as a result the throttle quadrant would be too low for comfort. I decided to not use a single large touchscreen, and instead use two 7″ touchscreens that I bought a while back. I re-cut the sides of the pedestal to suit this new arrangement, which removed a chunk from the top, and to compensate I added some feet to the pedestal to bring it up to the right height. Eventually I will run some plywood around the bottom to conceal these feet and create a chamfered section which I may put some floor-level lighting into.

My new A340-style throttle quadrant finally arrived from the good folks at Throttletek in El Salvador, and it’s a beauty. I added the necessary supports to fit this into the pedestal and as you can see, the results are very satisfying. 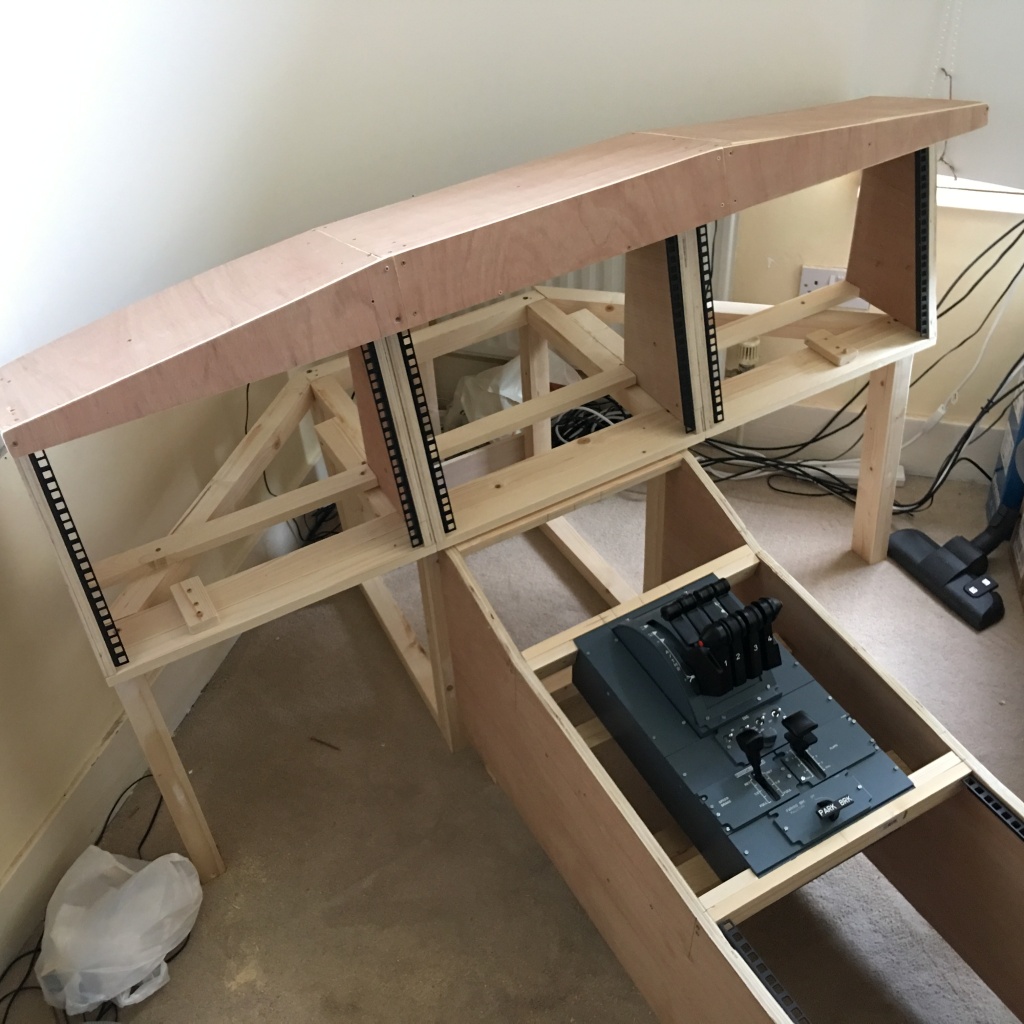