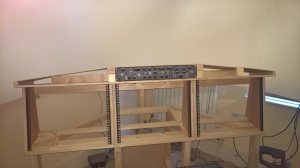 You always get the punniest titles with this blog. It must be the old sub-editor in me coming out. Anyway, it’s been a while since the last update and I have gotten a few things done, so I wanted to share progress notes with you (though I’m also live-tweeting the build as it goes at @neilhewitt, if you want to follow along).

With the replacement screen more or less finished – it still needs trimming, and I haven’t put the final coat of Screen Goo on it because I want to be ultra-sure this is the one before I open that expensive tin – I moved on to the rest of the mini-pit. I mentioned the console I was building in my last update, by which time I had just built a console frame and was talking about swappable modules to mount on it.

I started off on the flight sim modules. The idea was to have 3 MIP modules sitting side-by-side so they could be moved around as needed, topped with a glareshield module that would bind them all together. I measured up and built 3 panel frames. 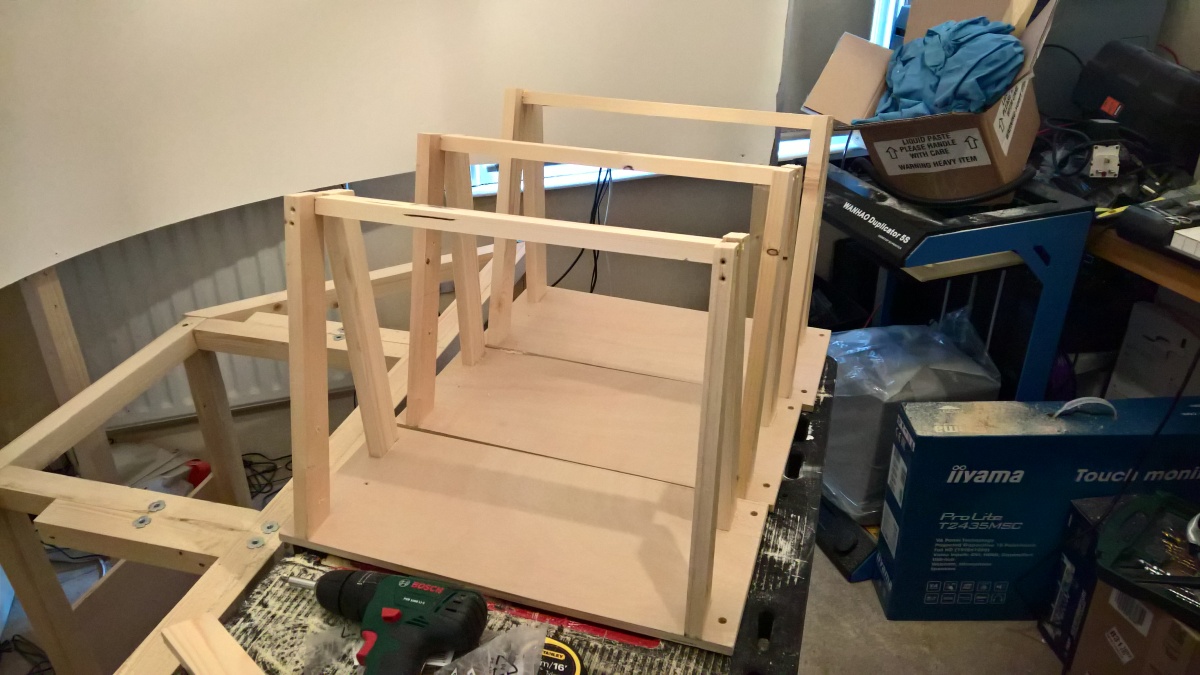 For mounting, the plan was to have bolt-holes in the modules and tee-nuts in the frame, so I could screw in a standard M8 bolt. But the need to place the bolt-holes where the frame members were meant I lost a lot of usable space from the left and right of each module frame, and the generally imprecise nature of softwood kiln-dried timber meant that each module was subtly off or outright bent. I got as far as putting on blank plywood fronts and topping it with a board intended for the glareshield, before decided to stop and start again. 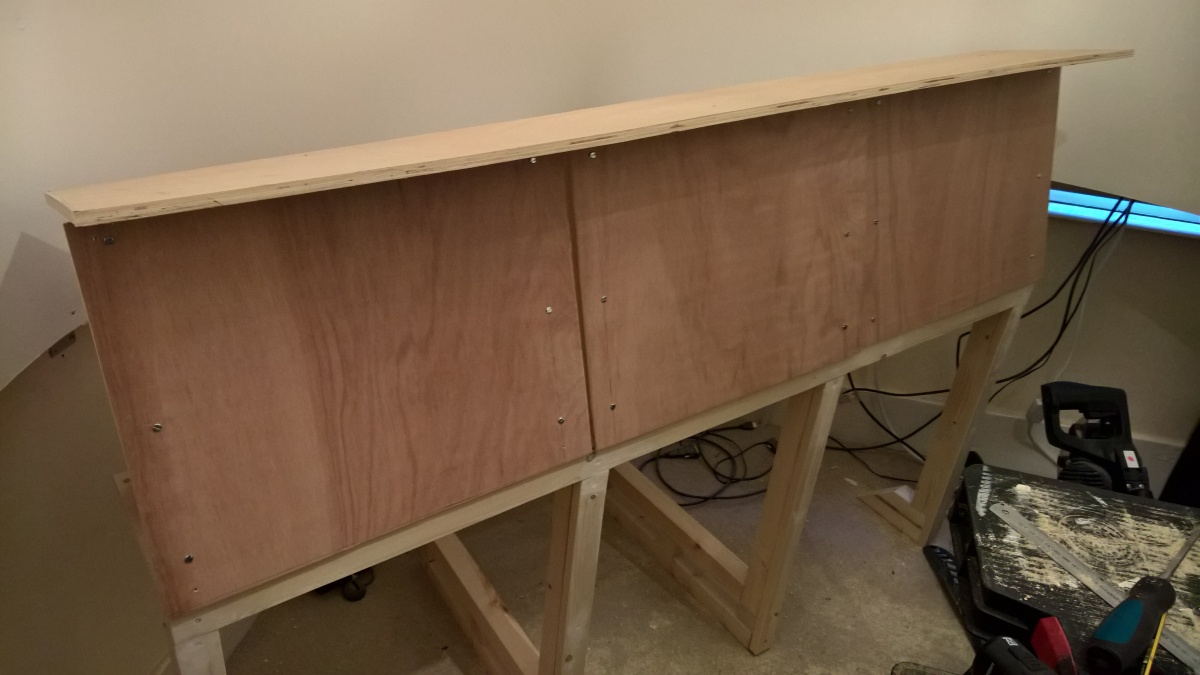 But I persevered and got this far before dismantling them

This time around I decided to make the modules with sides of 18mm plywood, and pine baton for the bracing. I also had a brainwave and bought some standard rack-mounting strips of the kind you’d use in a rack for a synthesiser or in a datacentre. I made the three modules, adding in the rack-mount, and I changed the mounting mechanism. Now there are two cleats at the front of the base under which the front of the MIP clips, and at the back where the rear braces go I drilled holes through the braces and into the frame underneath, and I put 8mm dowels through each which were then glued into place in the frame. So now, when I want to mount the MIP, I put it in place and snap it down into the dowels, and that holds it pretty rightly. I may add some extra cleats at the back if I need them. With this new mechanism it is necessary to permanently bond the three modules together into a single MIP unit, which is OK – I can still move the panels around between them thanks to the rack-mount solution and the fact that they’re all exactly the same width. 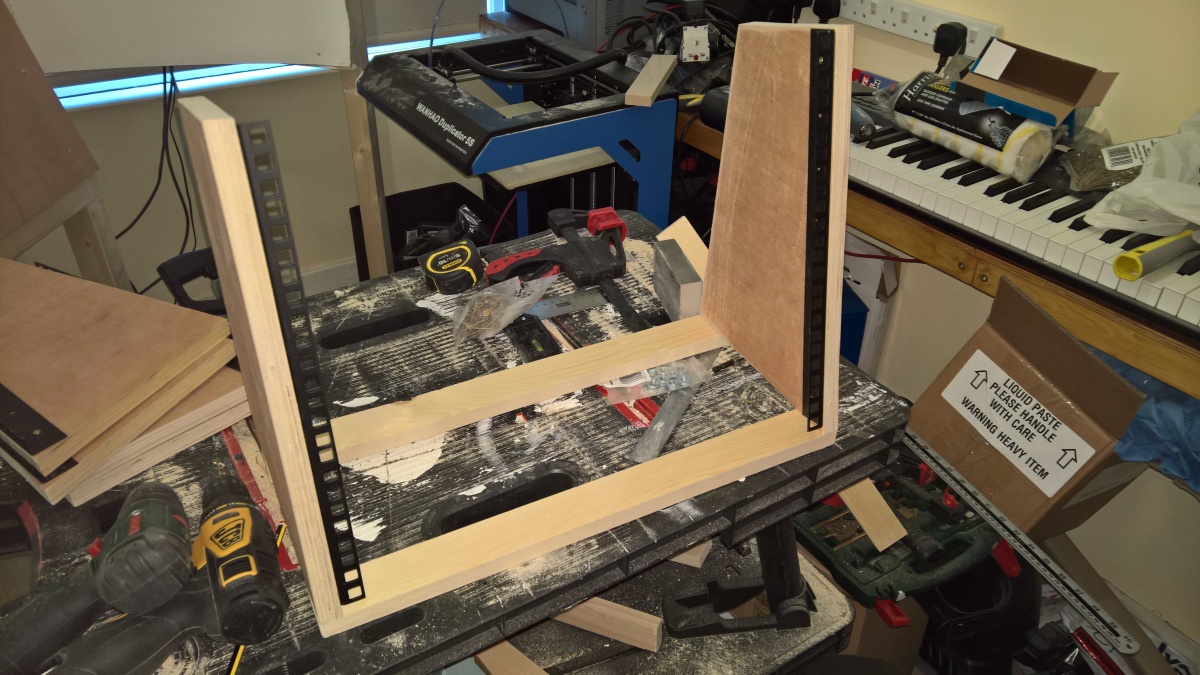 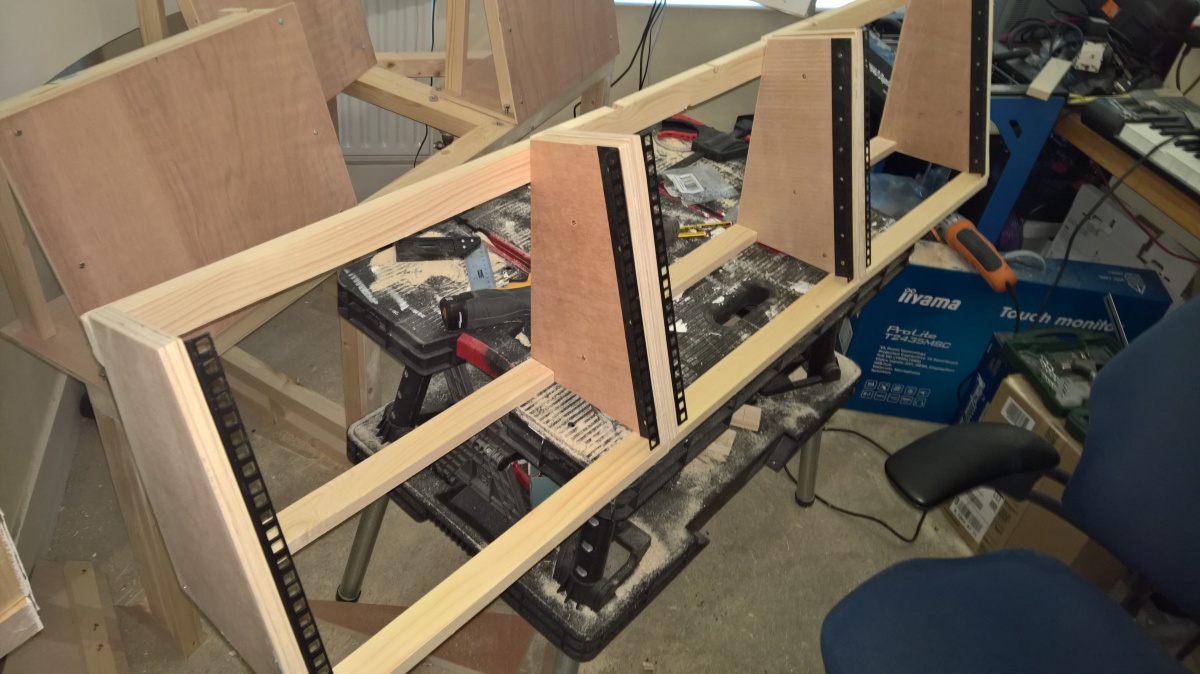 The three modules permanently bonded together 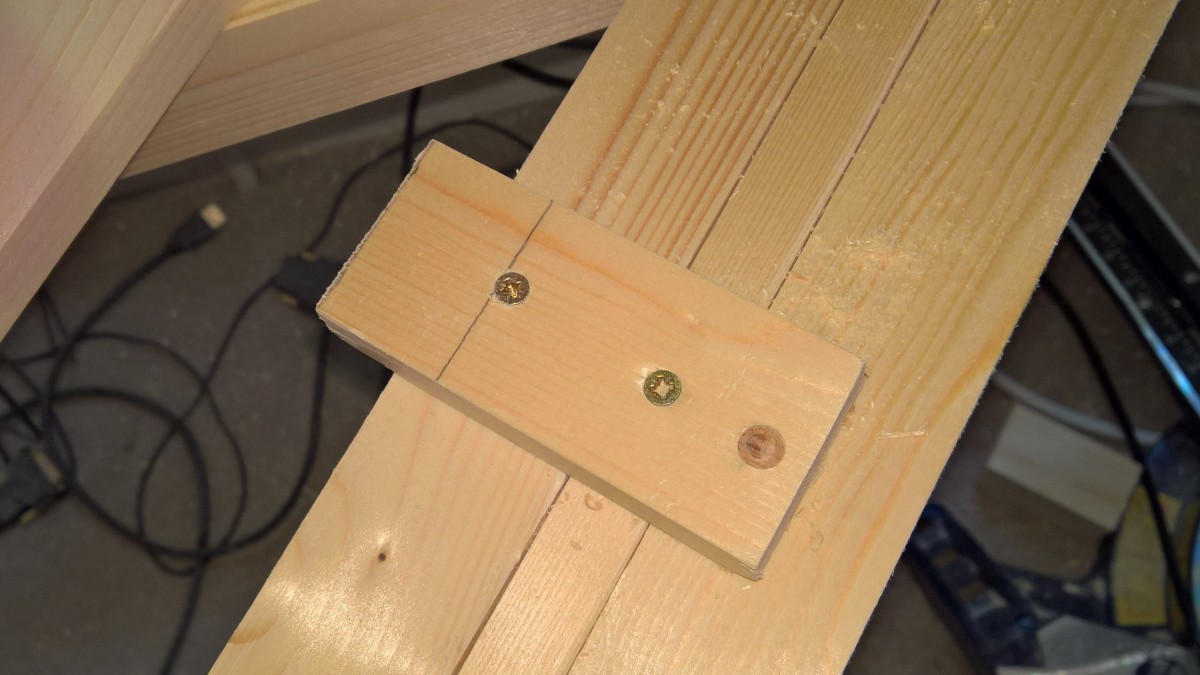 This is the front right cleat

That done, I turned my attention to the glareshield. The board I had cut was good enough to use as a base, and on top of this I put some 44m x 44m baton to give it a central spine and straighten it out a bit. On top of this went a couple of layers of 18mm x 44 baton to bring the overall height to 80mm, which is what the 737 MCP (autopilot panel) I bought from OpenCockpits requires. For the wings I allowed a slope of about 5 degrees down to an end-height of 43mm. I clad the top in 6mm plywood sheeting which is very easy to cut and flexible enough to bend a little if it needs to. Then finally, I cut out covers for the front from more 6mm ply and mounted them. Structurally, job done. 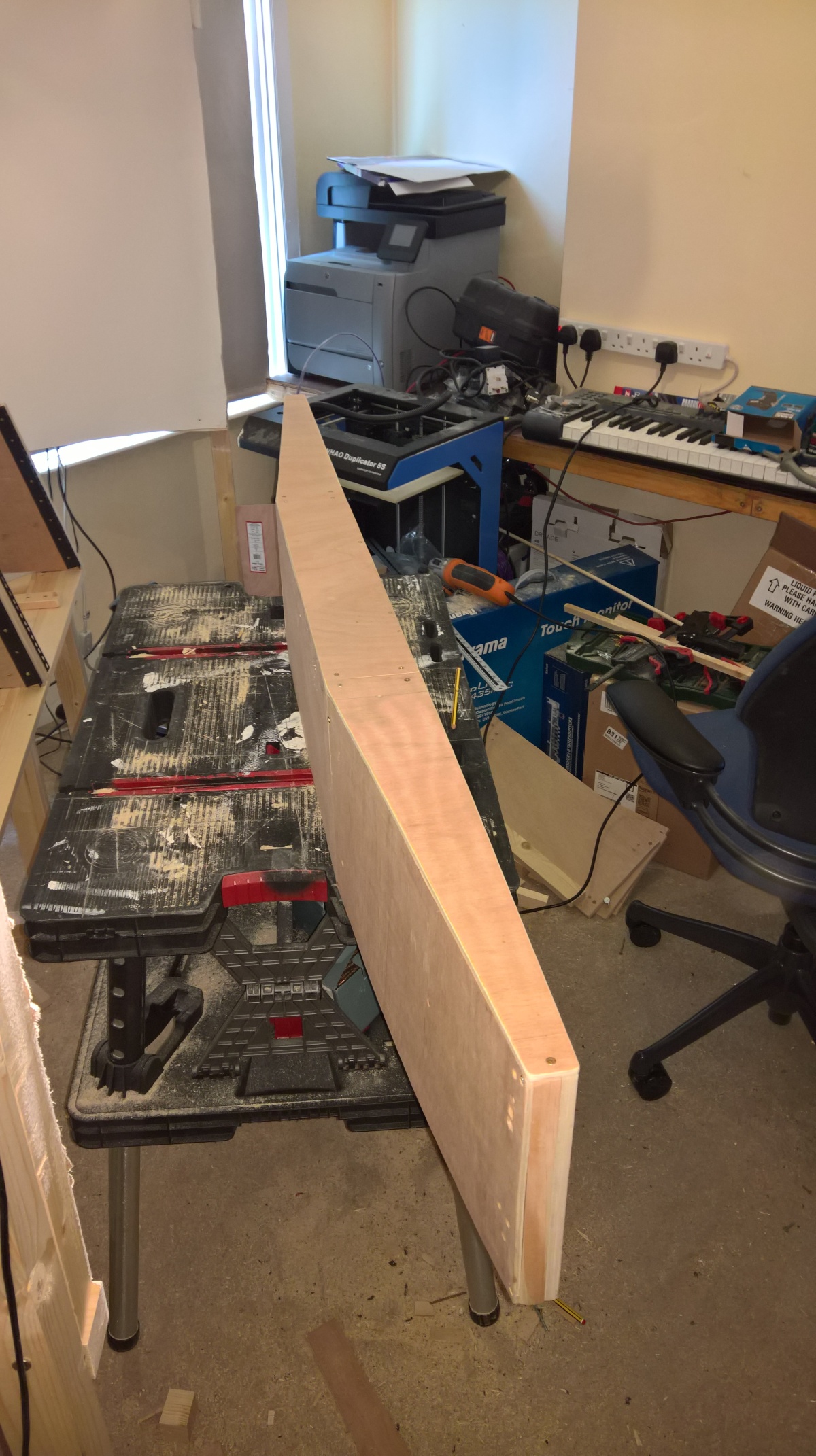 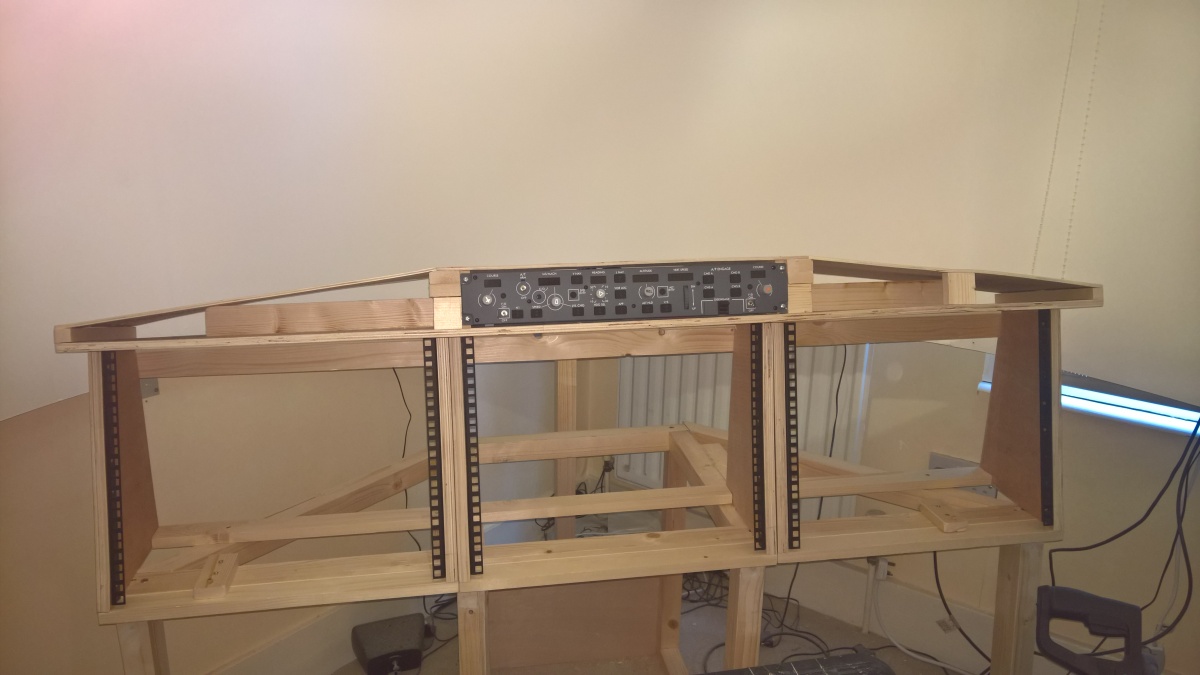 Test-fitting the MIP, glareshield and MCP

Of course, there’s plenty of tidying-up to do here. Lots of screws were moved during the construction, so there are holes to fill, blemishes to cover, sanding to be done, and I need to cut holes in the front panels for the MCP and for EFIS-ish panels to either side (EFIS is a Boeing thing, it’s a panel that controls the mode the avionics are in, so I’d only need it when flying Boeing planes – so I intend to do something a bit more generic that can serve multi-duty for many aircraft), then paint and wire up. 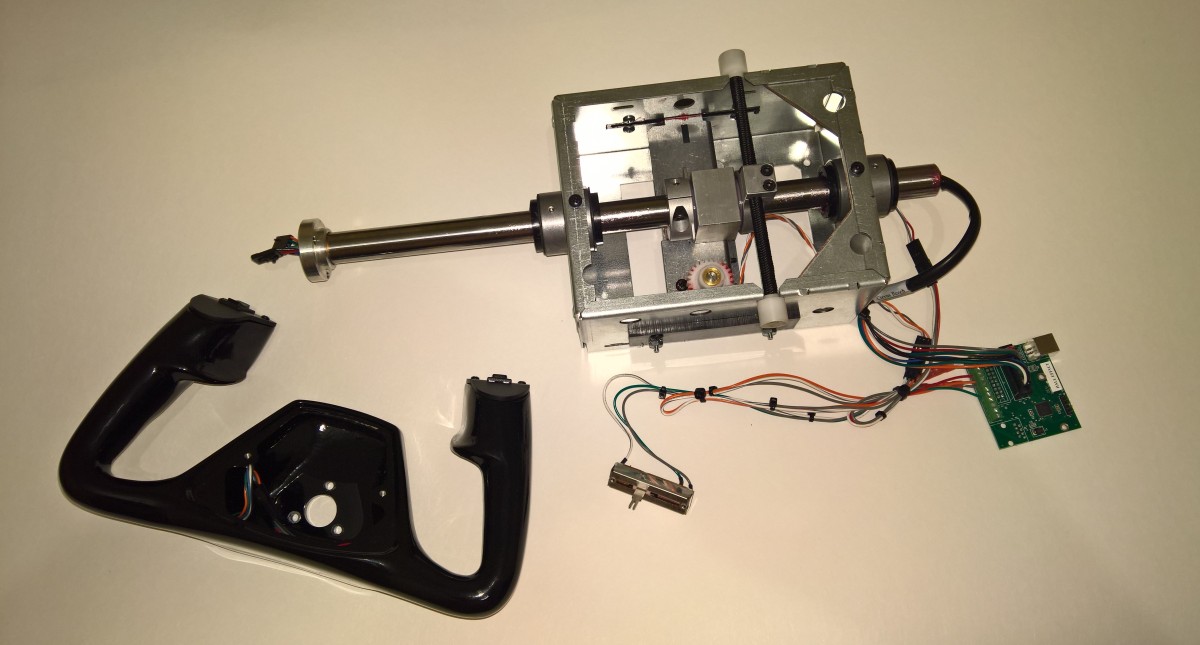 But that’s a task for later. Now I move on to the next major part of the project, constructing the pedestal frame. Yes, I’m going to have a full pedestal with a large touch-screen up top for the MCUs (these are basically trip computers for the nav systems in Boeings and Airbuses and some other regional jets) and things like weather radar, then a space for my Throttletek Airbus 340-style TQ and flap / spoiler / engine panel, which is due to turn up at some point in May / June – though I’ll be able to use my CH throttle in the interim – and then a rack-mount area. My intention is to make the rack-mount part the same 500mm width as the MIP modules so panels are interchangeable, but that may end up being too big to fit. We’ll see. I’m not doing a multi-part pedestal a la Boeing, though, this will be an all-in-one a la Airbus.

When I’m done, I’ll have quite a mish-mash of gear. Boeing MCP, Airbus TQ and controls, Airbus-style pedestal but Boeing-style MIP, and plenty of my own custom stuff to boot. In v1 the panels will just mount my current Saitek gear – the radio panel and the switch panel, at least, I no longer need the autopilot panel because I have the MCP, although I might keep both while I’m getting the MCP to work everywhere. Sigh. There’s a lot of work involved in all this stuff!

Once I’ve reached the point where I can mount instruments in panels, I’ll probably stop and leave finishing and painting until later, so I can test-fly everything. The sim room is a complete mess because of all the woodworking debris and I want to clean that up completely and return the room to proper use, but not until I’m 99% done with the woodworking for this phase. I will also knock up some modules for driving games, build a new base for my seat, and add detachable ‘wings’ to hold my Thrustmaster Hotas parts and mount a keyboard tray, for playing Elite et al. Once I have all that, I will clear out the room and starting actually setting up hardware and software, finalising the screen-warping, and get down to some long-overdue play-testing! It’ll only have been 6 months or so to get to this point 🙂

Stick with me if you dare! I’m actually going to finish something and be able to play with it! If you’ve been with me all the way you’ll know it’s been a long journey.

Final update (this is getting long, after all) is that I finally had my back garden cleared and re-done and so the way is clear, probably next summer, to start building the workshop / shed that will be the proper sim’s home. But that’s a whole other topic of discussion, so let’s table it for now. 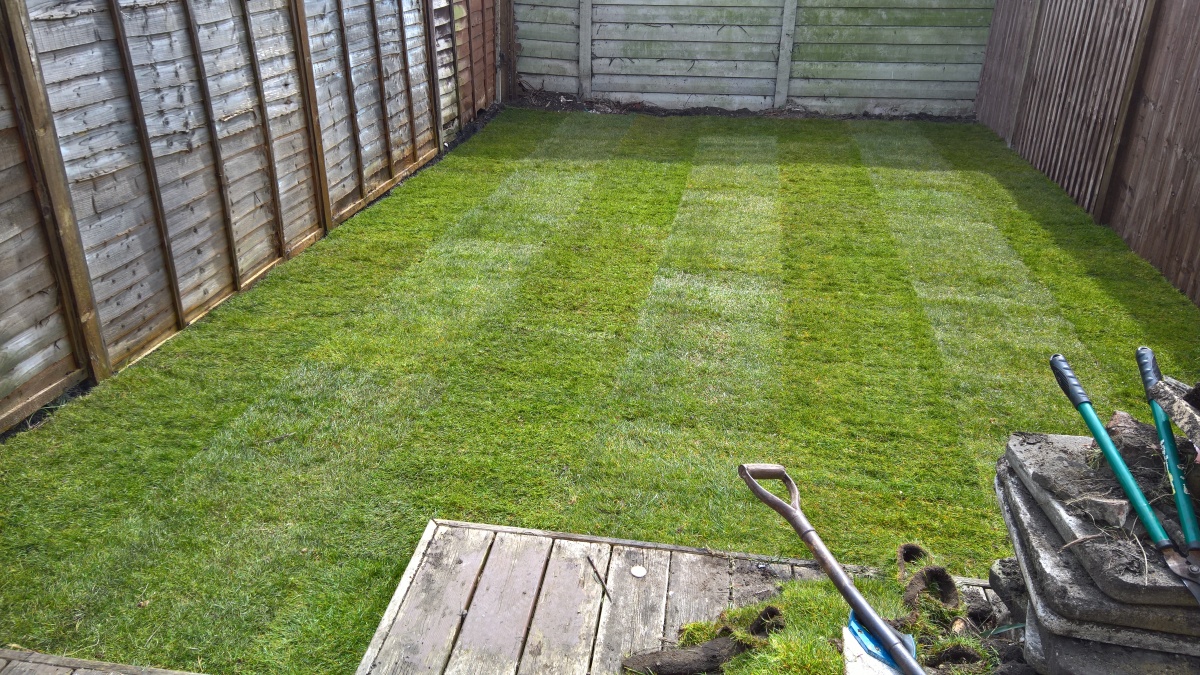 Gotta love the look of new turf. There used to be old sheds and all-sorts down there.