So that took longer than I had expected…

I got the new hardboard for my screen update a few weeks back and it sat there for a few days while I got ready and pulled down the existing screen. But then I was ill for a bit, and then I had work stuff to do, and one thing and another meant it was a while before I got round the new screen. 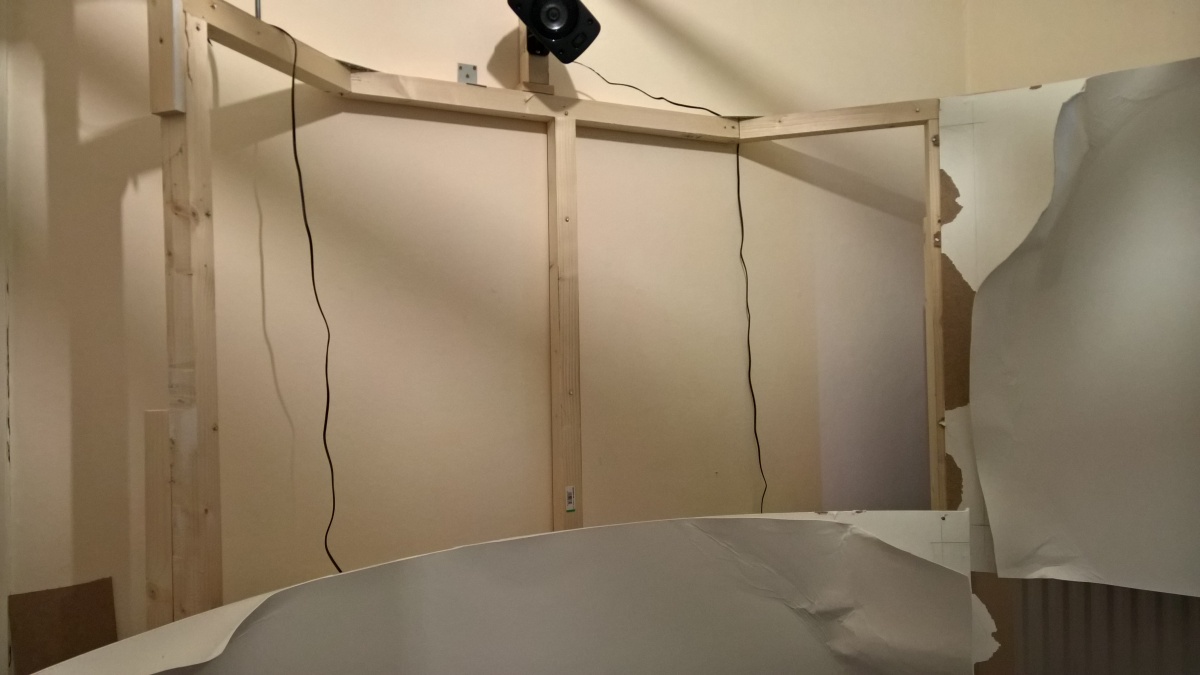 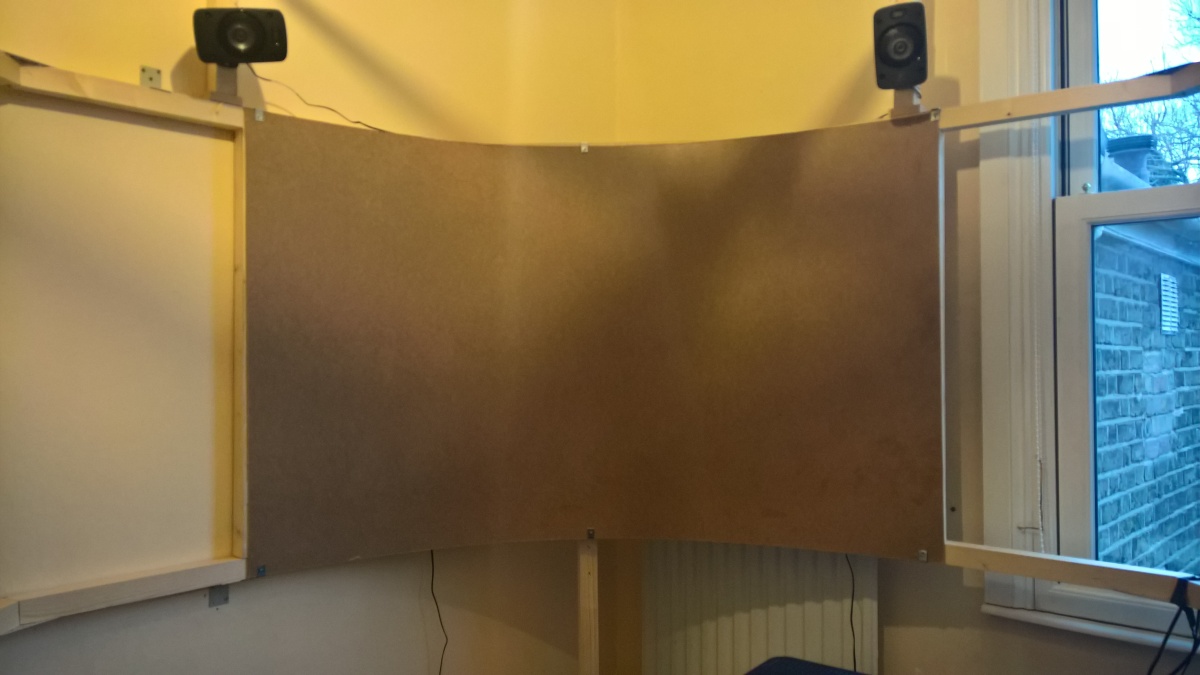 As planned, I made it in 3 sections – the center one double the size of the other two, since I needed to use the same mounting points on the frame. I added new frame members to increase the area available to take screws. Thinking laterally, I bought a bunch of corner brackets – small steel strips with a 90 degree bend in the middle – and screwed these into the frame top and bottom, so I could maneuver and bend the hardboard into position without needing to hold it in place all the time. I also tried using hardboard tacks which are nails that you can use with hardboard where the nail head disappears into the board, and these do work pretty well, to the point where I could have a lot fewer screws in the screen than I had before. My initial plan of a zero-screw setup didn’t pan out, though, as there were still areas that needed tensioning to keep the surface as close to true as I could manage.

It’s not a perfect job – in particular on the right-hand-side join, there’s a noticeable valley which I’ve been unable to flatten out entirely. But this is in a place where I won’t be looking a lot, and it’s correctable with the warping software. The real improvement is the middle. Because there’s no join in the middle there’s no distracting imperfections in the image. It’s a smooth curve. I’m pretty happy with it.

A few rounds of filling and sanding later, I was ready to paint – but then I got ill again and left it for a few more weeks. Recently, I got round to it, putting a few coats of brilliant white wall paint on the surface. This will act as an undercoat to the final Screen Goo coating I will put in the thing once I’m sure it’s ready – and my policy of waiting last time paid dividends given that I ended up trashing the first screen! 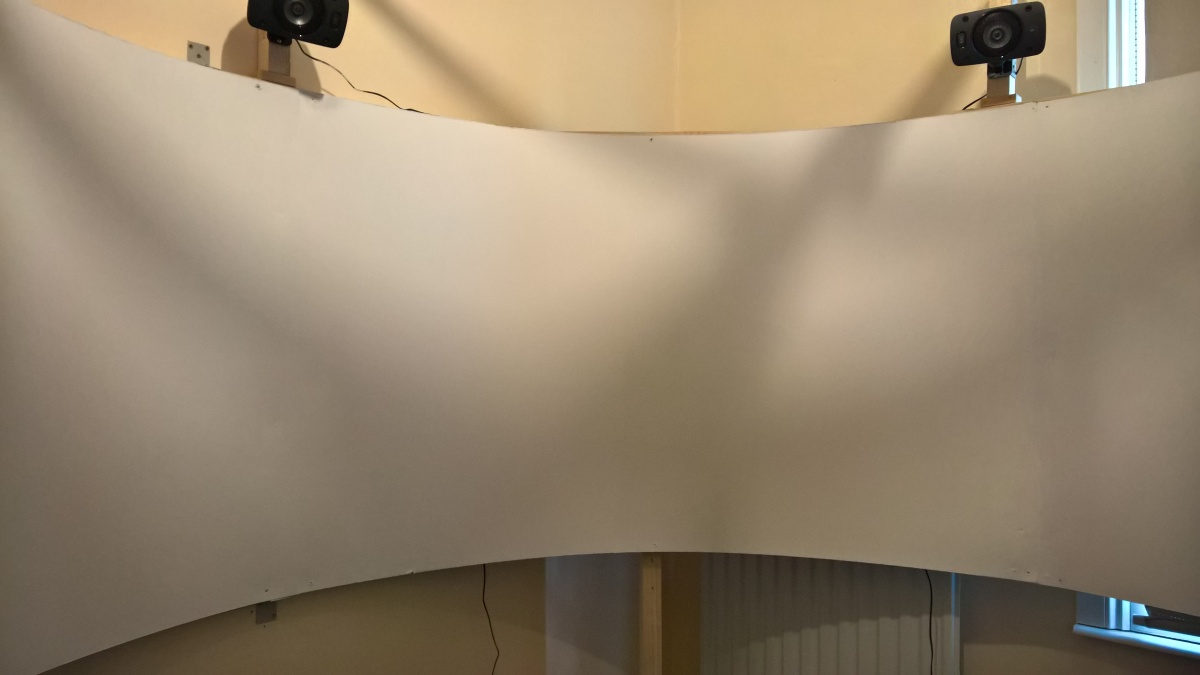 Even after all that, the screen needs some nice black edging and finishing, and that will happen right at the end once everything else is done.

Before I move my gaming PC and controllers etc into the room and start testing the thing properly, I need some kind of place to mount everything, and my current DIY table + console arrangement, while functional, has a lot of problems. Notable, the console is too tall and fouls my vision, and it’s not multi-functional – I can’t play racing games, say, and something like Elite is OK except that the console gets in the way. So I resolved to do something a little different.

As a first step, I’ve built a frame that goes inside the radius of the screen. It’s 1.5m across split into three sections of 500mm each. At the top will be a series of mounting points (dowels and bolt tees). I can then make ‘modules’ for my gaming set-ups, which sit on these mounting points and bolt down. So I’ll have a racing module with my steering wheel and gear shift etc, and a ‘space sim’ module, and a ‘flight sim’ module. In fact, for simming, my plan is to build 3 modules, one for each 500mm section. In one, say, will go the yoke and an MFD and some other instruments, in another the various Saitek panels I have, and in the other, a PFD etc. I’ll also build a pedestal for the throttle quadrant, radios etc.

The idea is that if I want a 2-person flight sim environment, I arrange the modules that way and I sit on the left-hand side. If I want a 1-person flight sim, I move them around and I sit in the middle. And so on. The modular design means that as I build more sophisticated avionics and controls, I can swap out the redundant parts like the Saitek kit over time while still being able to fly whenever I want.

In the very short term I’ll probably throw together a very simple flight sim module for my new PFC Cirrus yoke and the Saitek panels, just to get stuff up and running.

First, I have to reset and reconfigure my projectors and set up warping and blending on my real gaming PC. Expect some video coverage of that soon.