So I’m still working on my curved projector screen. Last time I updated you I had gotten the hardboard onto the frame in a semi-circular shape (roughly) and had gotten the whole contraption up on tripod legs.

Since then, I’ve adjusted the legs slightly for the uneven floor in the room, and firmly attached the left side of the frame to the wall. I’m thinking about doing the same on the right using some baton as a bridge. But it certainly isn’t going anywhere now, not without taking a chunk of wall with it. 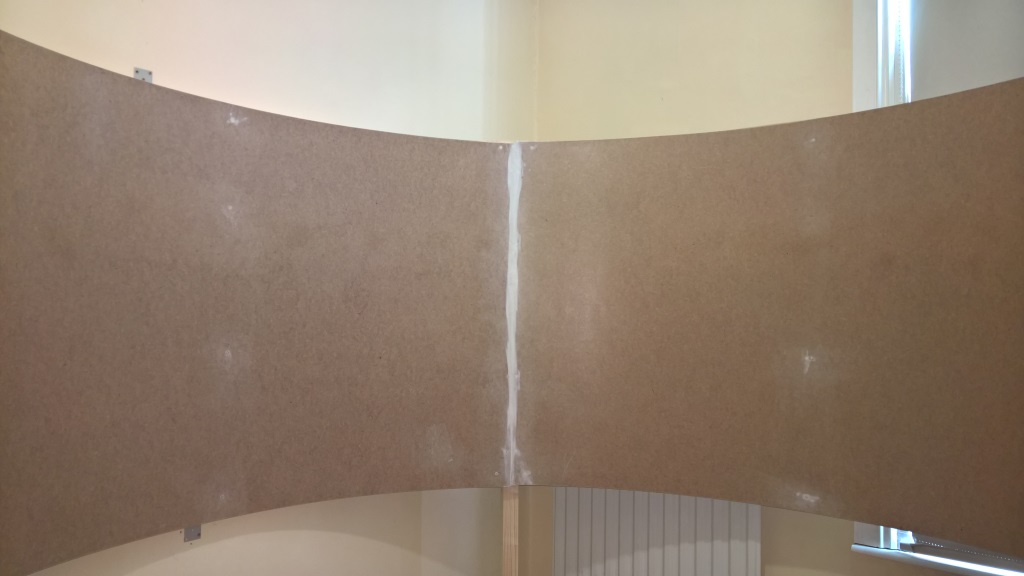 Over the last few days I have been filling and sanding. This is harder than it looks on a curved surface, since you can’t use the usual filling knife to make a flat surface. In the end, I used my fingers a lot, which was messy. I had to give particular attention to the split between the two sheets of hardboard, as this will be in the middle of the screen and needs to disappear altogether. This will be a big challenge. Several rounds of filling and sanding later, I had a reasonably smooth surface to paint. Today, I put on the first layer of undercoat. This is going on before the Screen Goo base coat – indeed, putting on the Goo will be almost the last things I do, I want to be sure that everything else is good before I apply paint that costs hundreds of pounds a tin!

I’m using an undercoat intended for ceilings and masonry, because this will soak into holes and defects and will stretch and resist cracks, and cover blemishes well. But after a single coat, there are still very obvious problems – a clear dividing line down the middle where there is heavy filler and the surface accepts paint differently. Also, now it’s painted, I’ve revealed a few surface imperfections that will need to be further filled. So I expect I’ll need to do maybe another 3 coats of this paint before I’m happy that there’s a flat white surface I can apply the Screen Goo to. 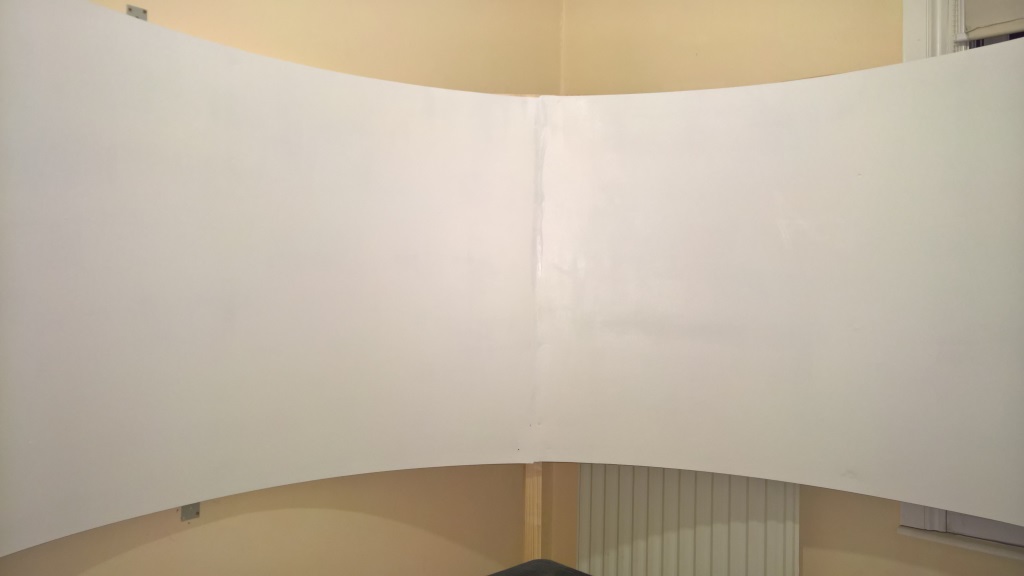 After first coat of paint – note the obvious middle seam

Once I have that initial flat white surface I will mount the projectors and get their positions fixed. Then I may do some initial tests on the image warping software – of which more in a future post – to see how it all works. Once I’m happy it will work as constructed, the Screen Goo goes on. I’m a bit nervous about that 🙂

I’m hoping for some form of demo by New Year – not complete, by any means, but a working, warped image. We’ll see…