It’s nice to be back. The last actual content-bearing post on this blog was way back in September 2012, I note. To be clear, I did work on the project between last September and now, but I didn’t get around to posting about it because of the situation with my mother that I mentioned previously. Between mid-October and about mid-February, I did no work on the project at all. I started back slowly, piecemeal, an hour or two at a time. It’s been a difficult period and a very busy one for many reasons, and the last thing I felt like doing when I got home was anything active. That’s slowly changing, and there’s enough new work to report on to make it worthwhile posting an update.

When last I left you, I had just re-done the overhead shrouds and was planning to move on to the centre pedestal. I had created a prototype pedestal frame, but realising that my plan to use the 180 degree swivel feature of my Galaxy seats to get in and out of the sim would not work for lack of space, I had concocted a plan to create a pedestal that hinged upwards a la Battlestar Galactica. I actually did prototype this last year before the break in work, but the construction of the relevant hinges proved difficult and the whole thing was somewhat unwieldy. So I had another brainwave. How about a pedestal that retracts? And lo, this was born: 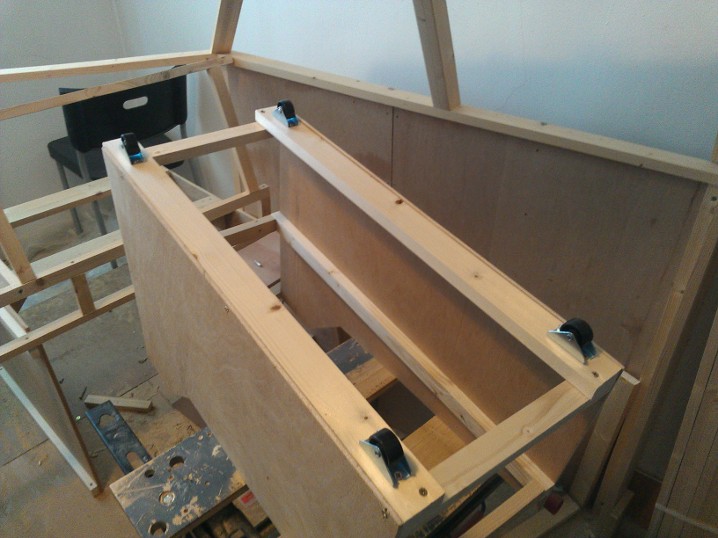 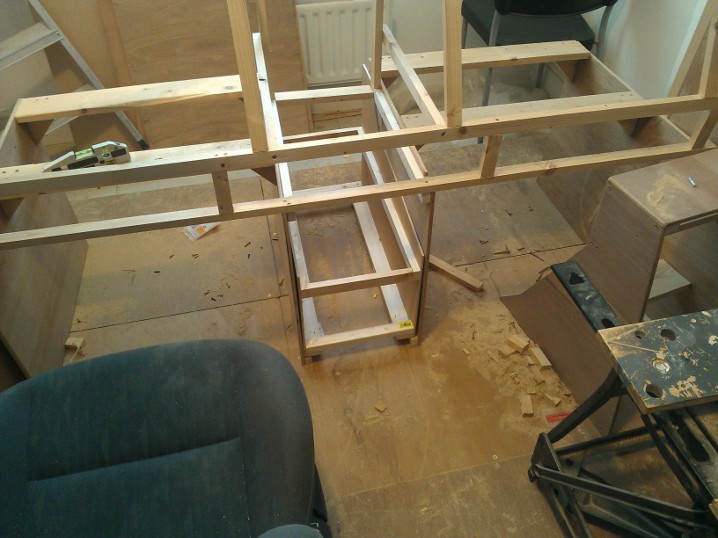 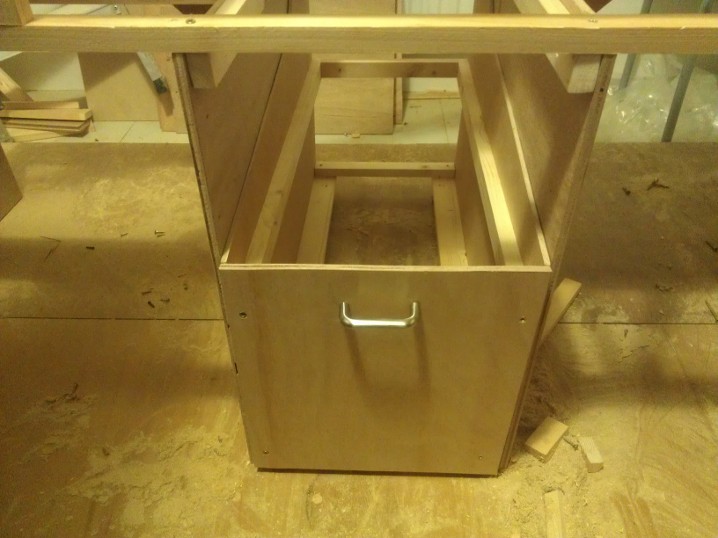 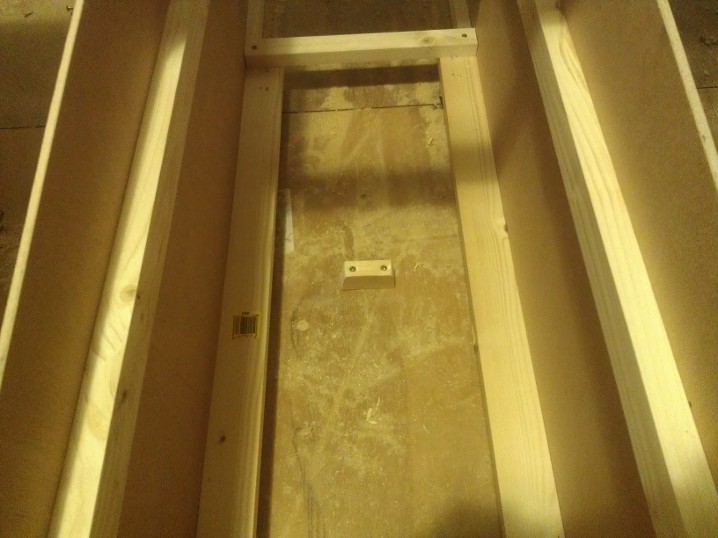 The pedestal sits on small wheels, and the frame is designed to fit inside the gap between the footwells like a drawer – indeed, there are wooden runners in there if you look closely. Magnetic catches hold the thing in place against reasonable force once extended, and a small block stop prevents it from retracting too far. The frame still needs a little love – it’s sticky in parts of the cycle – but in principle I’m very happy with it.

So, having taken care of the pedestal solution, I finished the work on the primary structure of the shell. All the panels and detailing work remains, but structurally – bar a final rear bulkhead and door – that’s it. At about this point, my long break kicked in, and I did little or nothing for some months. I did make a few amends to details within the shell, tidying up around the place.

When I picked things up next, I decided to work on the window framing detail. I already have the basic window structure in place, but I needed some kind of framing element to provide a place to secure the plexiglass that will serve as windows. First, I added a second element to the front window frame to give me a surface at the same angle as the frame on the side:

With that done, I measured and carefully cut out two panels of 6mm ply to cover the window frame structure. Because, as always with this project, no angle or distance is quite perfect, there was a lot of trial and error to get these to the right size and shape. Then, I cut out the centre of these panels to leave an outer frame that matches the shape of the window holes, leaving a small border as a fixing point for the plexiglass outside. Here’s some pictures of the action:

The frames still need some work – the inner edges need better finishing, and, being plywood, there’s lots of gaps and chips that need filling, but the goal is to have frames that look like they’re part of an aluminium exterior skin. The gaps you can see at the bottom of the frames will be covered by the finishing details I will be putting on the interior frame members – a combination of foam padding and vinyl covering. Once properly filled and painted, these frames should look the part.

Having proven the concept with the two left hand side windows, I now need to replicate this for the front and right side windows. The rear windows on either side will get a further covering of translucent paper on top of the plexiglass, since there will be no display behind them. This is a common practice on simulators with a limited field of view.

Finally, and this is almost worth a post in and of itself, I have built new plinths for the Ford Galaxy seats I’m using for this project. To get a proper seat pan height, these need to be elevated about 120mm above floor level. I build an early version of a plinth and then discovered that I’d done my calculations completely incorrectly and they were in fact too small to fit the seat frame; I then knocked up something rough and ready just to place and test the seating. I took this apart but used the measurements to ensure I had exactly the right size for a base and for the bolts which are used to hold the seats down.

The plinths themselves are structurally very simple – basically four large wooden blocks that each sit underneath one of the four feet of the seat frame, and then a 12mm plywood surround, turning it into a box arrangement. On top of the block – which are recessed – and within the surround – giving a lip arrangement which hides some of the gory details – goes a 12mm MDF sheet cut to the correct dimensions (or as near as I could get without a proper fence set up). The sheet itself bears no weight except at the corners, where it rests on top of the wooden blocks which are taking the majority of the load, but it covers up the interior of the plinth and gives a nice effect. In the end, I had to buy an electric planer, something I’d been wanting for a while, to trim all these parts into decent conformity.

I’m using a captive bolt arrangement, where bolts are inserted pointing upwards and the heads kept captive by screws along their edges, and then by the pressure of being held between the wooden blocks and the MDF sheet. This makes mounting the seats much easier, as I need only get them into place and then use nuts and a spanner to secure them, without having the take apart the plinth itself or attach it permanently to the seat.

The plinths are then fastened to the sim floor with plastic jointing blocks. A brief test suggests these should be good enough to keep everything in place provided no-one actively tries to rip them up. Most of the weight is pressing down, anyway, so that’s what we care about most rather than lateral forces.

The plinth tops are screwed down into the blocks below, but are designed to be removed as needed, and so I put a drawer handle on each one for easy access. This caused me problems when I came to test the seat placement, as it turned out they were about 2mm too high and were fouling the underparts of the seat and making it impossible to use the rails to move the seat back and forth to adjust for the user’s height. In the end I put three washers on each bolt above the MDF, and the seat feet go on top of these; this gives me a further 3mm clearance vertically, which is all I need, and the force still goes down into the blocks as before. You can see this arrangement in the photos below if you look carefully: 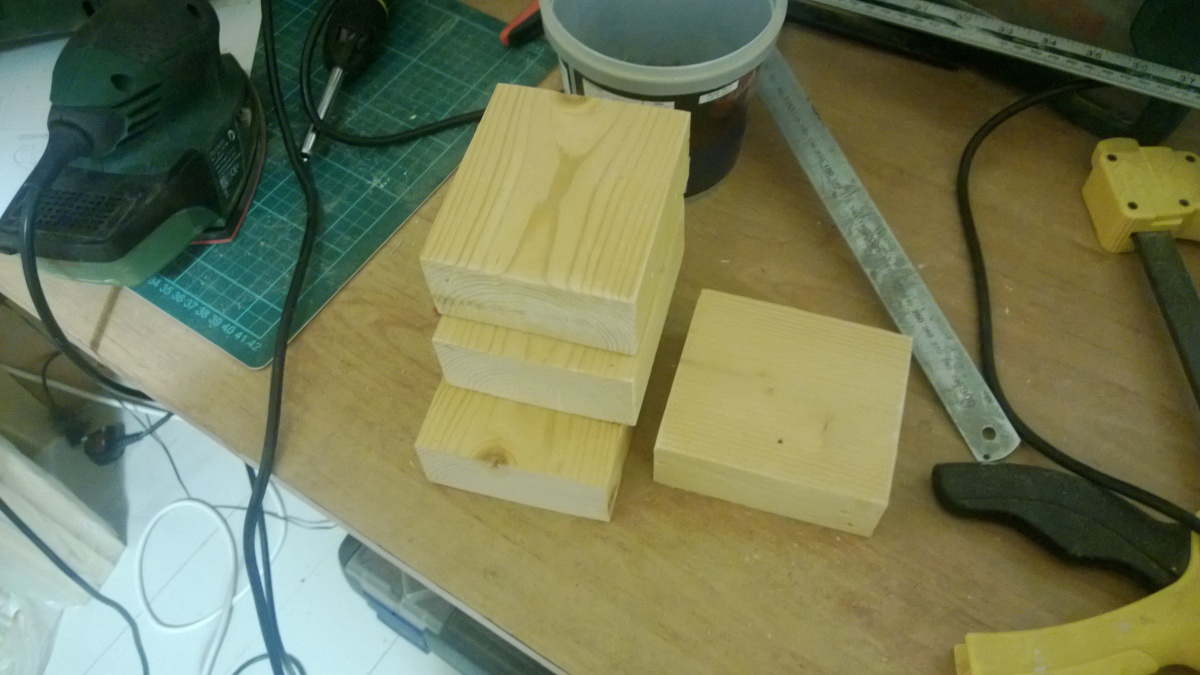 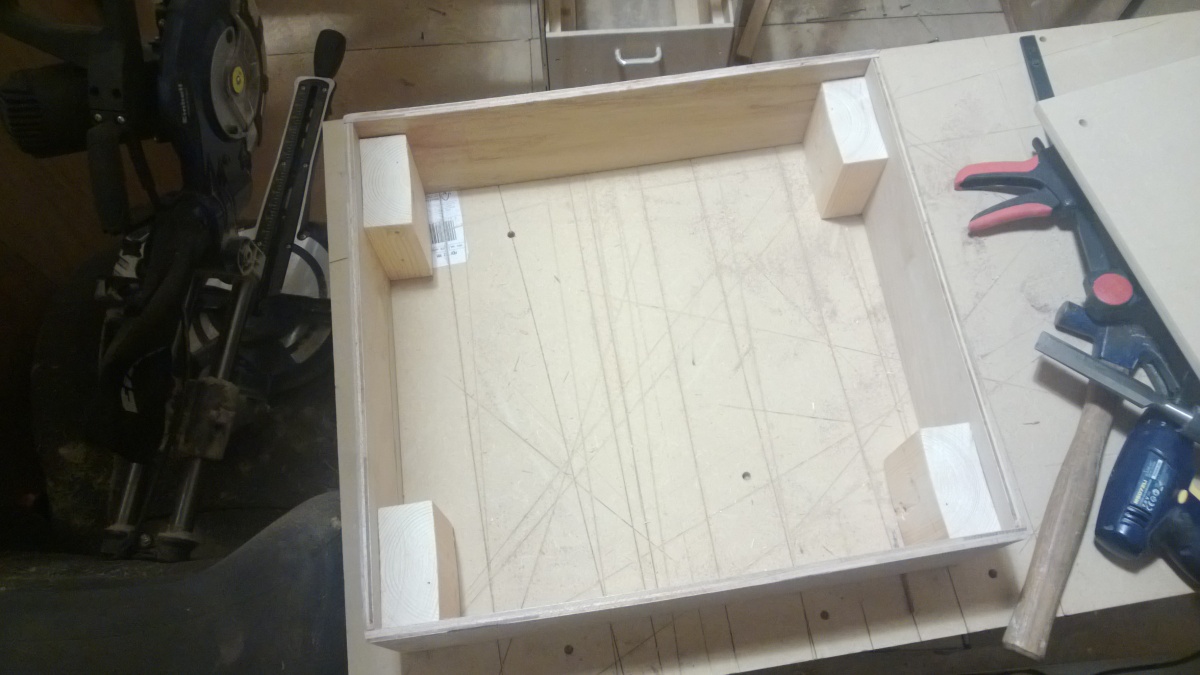 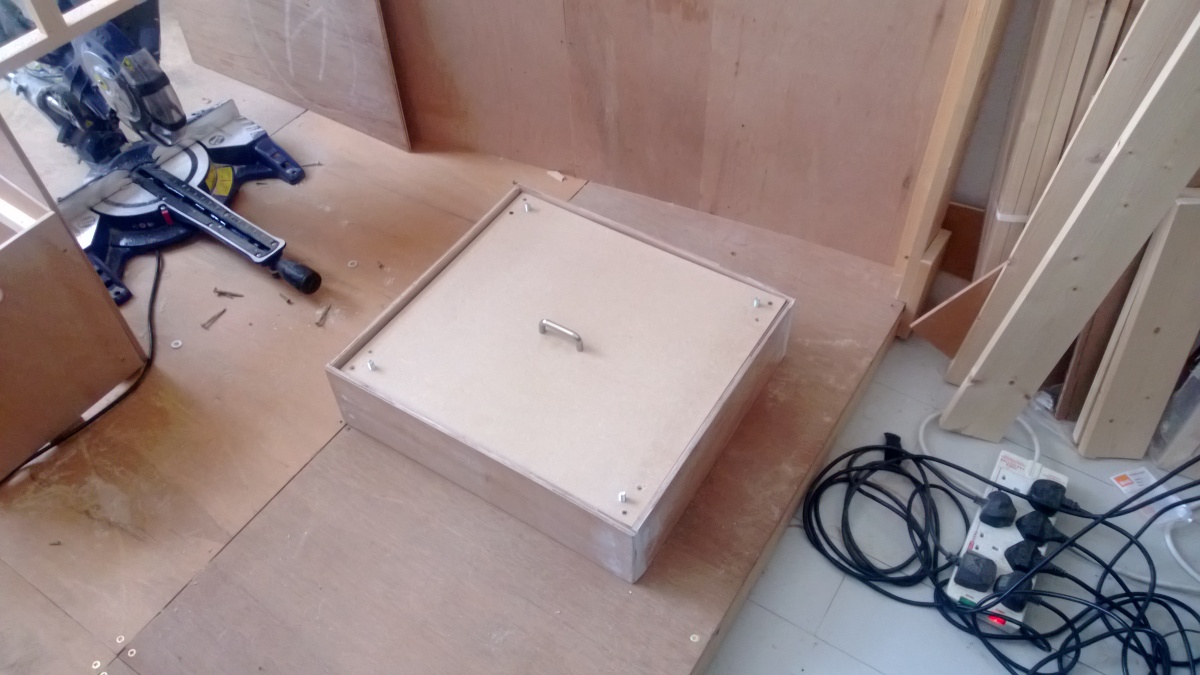 That brings me bang up to date. My next job is to finish all the window frames for all windows, fill and finish them, probably paint them – I’m generally leaving stuff to be painted all in one go, but for the frames I think it makes sense to do them early – and then test-fit some plexiglass and see how it all looks.

Then it’s all about the panels and the internal detailing. Still an lot to do there, but it’s much less about wood and construction and much more about other materials and work that can be done quietly, so in theory things should start to speed up quite a bit. I will prototype the various panels using plywood, come up with a final design, covert this into Visio format, and then order the plastic sheet that I need to fashion the panels. That’s a huge job, likely to take months just in itself; I’ll be doing a test panel first to test out my back-lighting technique. Once the shape and layout of the panels is finalised, there’s then an entire electrical system to build. Not to mention rejigging and fitting the yokes, pedals, and finally the most challenging part of the build of all – assuming I stay the course and do it myself rather than buying off the shelf – building the throttle quadrant. And that’s all before I get to the software parts of the project.

I shouldn’t kid myself. There are many, many months ahead. But in the next two or three months I should finish the heavy construction part of the build – until I need to build projector screens etc much later on – and I’ll have gotten way beyond the last two project reset points. No turning back then.

Expect another update in a few weeks. The frequency of posting will probably remain low for a while. But it’s nice to be back, finally.