Over the last few weeks, I’ve been hard at work building my new shell. I decided to hold off on posting progress here until there was something substantial to report, and because of the slow pace of work, it’s been a while. But I’m now ready to tell all.

My first attempt at a shell didn’t go as well as I’d hoped. Largely this was because of a lack of hard planning. I basically made it up as I went along and relied on my common sense to guide me. That only gets you so far. My original design consisted of an entrance ‘vestibule’ – necessitated because of the sideways placement of the shell – with a cockpit section beyond; but the cockpit part was far, far too small, as I quickly discovered. My windows were tiny. It would have been a joke to continue with it as it was. I considered all kinds of remedial options, but in the end I decided the only thing to do was to scrap it and start again.

Thankfully, I’ve learned lots of lessons over the course of the last few years, and these have informed my new shell design. I’m sticking with the same basic principles as before, which are:

The major design changes have been to orient the shell the other way – so the entrance is at the rear – and to derive from the basic structure of Flight Deck Solutions’ excellent 737 shell, which is an aluminium-sheet-and-frame construction that eliminates curves in favour of angles and planes, and is thus much easier to design and build. It looks like this:

Here, the interior of the shell has been lined with FDS’ custom plastic liners to give it that genuine 737 feel, and I will be doing something similar with mine. Remember, though, that my project is not a 737, nor anything specific. It’s a generic simulator with a hint of futuristic business jet. So I have been able to make compromises where I needed to in following the FDS style, and you’ll see where shortly.

I began by putting back in place the footwells taken from the last shell – the only parts that I’m keeping intact – and testing them with my Ford Galaxy cast-off seats (per an earlier post). I shifted the whole assembly 400mm to the right to provide a space on the left-hand-side of the shell to get around to the front. Then I began putting up the rear arch – you can see this clearly on FDS’ shell, this forms the backbone on to which the rest of the frame can be joined. 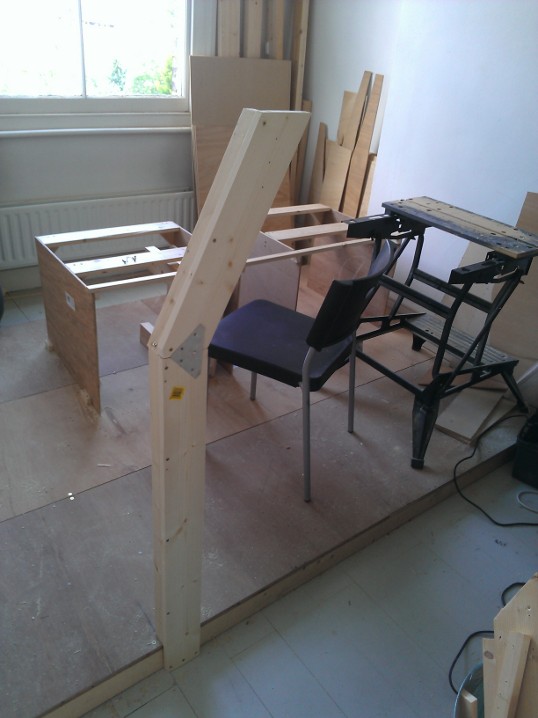 Next was to start building a frame around the cockpit area, at the level where the bottom of the windows would go. I decided early on not to have windows with a sloping bottom edge, like many Boeings. Most bizjets don’t have this. So the frame could be straight and was joined to the arch at the back, and to supporting posts coupled to the footwell sides and inbetween them.

From here I was able to add the the top frame for the windows, putting in place stanchions at the front and sides to mark out the window edges (though most of these will be replaced before the windows themselves get fitted).

Next up was the remainder of the arch, and some wooden members to define the position of the overhead panel and mark the sides of the shrouds which make up the majority of the cockpit ‘ceiling’. Again, since I am not copying the 737, I didn’t see a need to put in eyebrow windows. 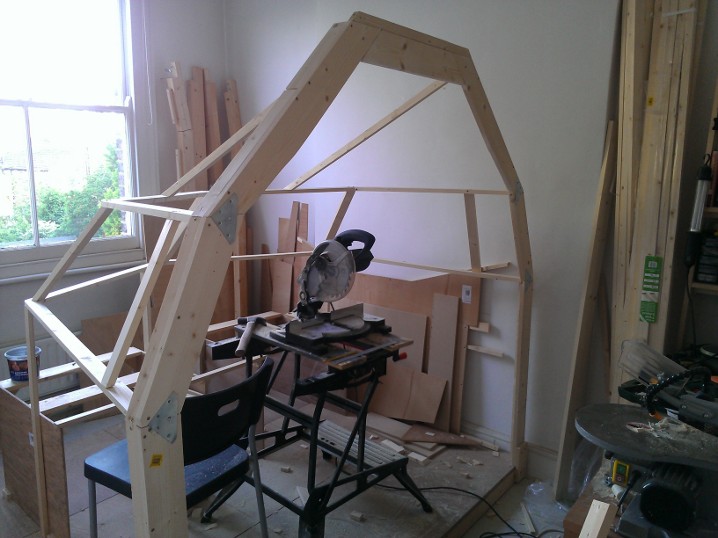 Then I worked on the shrouds themselves. When you look at these, you’ll think they’re a bit rough and ready, and they are – but these are only meant to provide an outline and anchor points for interior trim which will provide the actual visible ceiling. Indeed, wherever you see exposed wood inside the shell, bear in mind that it’ll all be trimmed in either foam + vinyl leatherette, wallpaper + vinyl-based paint, or acrylic sheet. When I’m done, you shouldn’t be able to see the joins at all.

The shrouds were in some ways the hardest part of the build so far. I had to break out my 3d brain and recognise that each could be made up of two triangles of plywood sheet cut to the right length and with the right angles. Time to find a triangle calculator online! I made several attempts at the first shroud, and I’ll admit that none of the pieces were exactly spot-on – you’ll also note that I’ve had to tack on an extra bit to the larger shroud pieces because I didn’t have a plywood sheet big enough to cut the triangle in one piece. Such is life, and as I say, you won’t see it when I’m done. 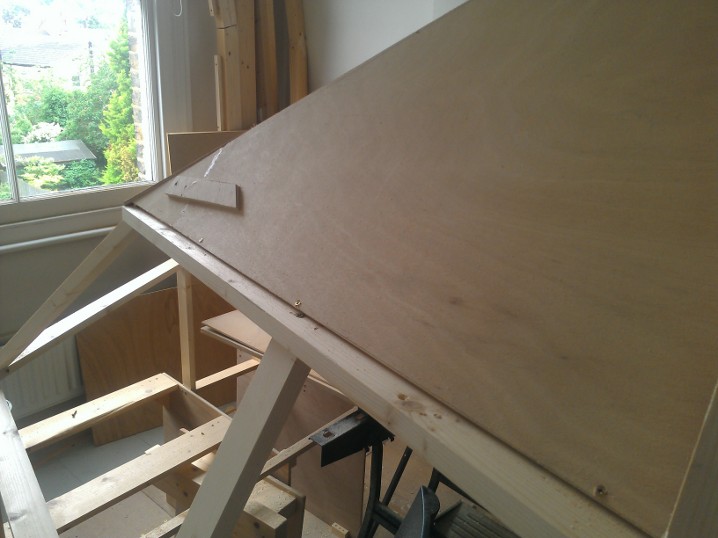 Next up, and most recently, I’ve been building the side walls for the shell. Again, I’ve gone with straight and flat walls, rather than attempting to replicate the curves of a real aircraft. Realism must give way to practicality here.

Each side wall is mounted on frame set between the window frame above and the floor below, held in place by pine baton. Plywood sheet is cut to fit (no easy task, since there are slight angles involved – nothing is quite straight; the perils of DIY) and screwed down to the frame members, and then a third baton is inserted behind the join between the panels and screwed to the edge of each, giving us a flat surface (and a backing to hold filler, since all of the panels have minor deviations to their cuts).

I also replace the stanchions for the side windows with the final versions. I still need to replace several others but it will be a while before I get around to mounting the windows themselves.

Finally, I worked a little on the frame for the MIP. I had intended to re-use framing from the previous shell, but the width at the MIP is nearly 300mm wider now, so that was a non-starter. In this picture you can see the beginning of the frame – the first part above the footwell where the yokes will exit, and a bar across the top marking the top extent of the MIP beneath where the glareshield will go.

That’s it for now. It’s starting to come together nicely, and I can finally envisage what the final thing will look like. I’ve bought the foam and leatherette fabric (in matt black and a nice snow white) to begin making the interior trim, which gives me something to do at times where I can’t use power tools, finally. There’s lots of detailing still to be done inside the cockpit – the whole MIP frame needs to be finished, various edges and fills put in where there are gaps now, and of course the pedestal and overhead are still some way away from being started… but compared to the pace this time last year, I’m fairly speeding along.

Dare I hope for first flight by Christmas? We shall see. More updates when there’s been significant progress.