Having cleared the decks, so to speak, I wanted to make sure I got the proportions for the new shell correct. To do this, I need to be able to sit in the approximate right place, at the right height, and be able to measure to the various places I can move, as well as the outer dimensions of the shell itself. So, first thing, I decided to fix up one of my recently-acquired Ford Galaxy seats with a base to bring it to the right height.

Because this has to take the weight of a rather portly gentleman – me – the base needed to be of strong wood. I considered making a box plinth out of 18mm MDF, but then decided on a slightly different construction based on wooden rails. Basically, two rails made of strong and thick pine would be bolted to the underside of each mounting rail on the seat, and then a fixed based at the bottom would keep the rails in place and stop them from ‘spreading’ at the bottom. Simple, but structurally strong. 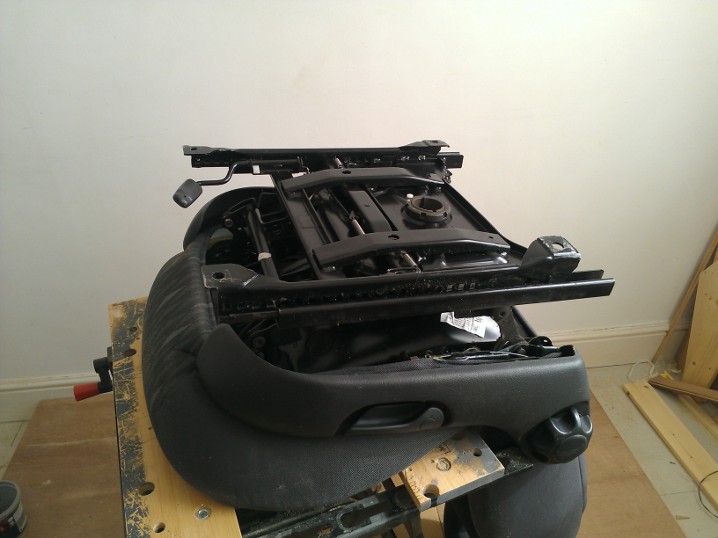 The mounting rack on the bottom of the Galaxy seat

The rails I made of 96mm x 44mm pine baton left over from the previous shell frame. Two pieces on each side, one standing vertically, the other horizontally, to form a ‘T’ shape, giving me a vertical height extension of just under 150mm, plus the 12mm of MDF for the base plinth, gives me just over 150mm, which is what I had calculated I needed. 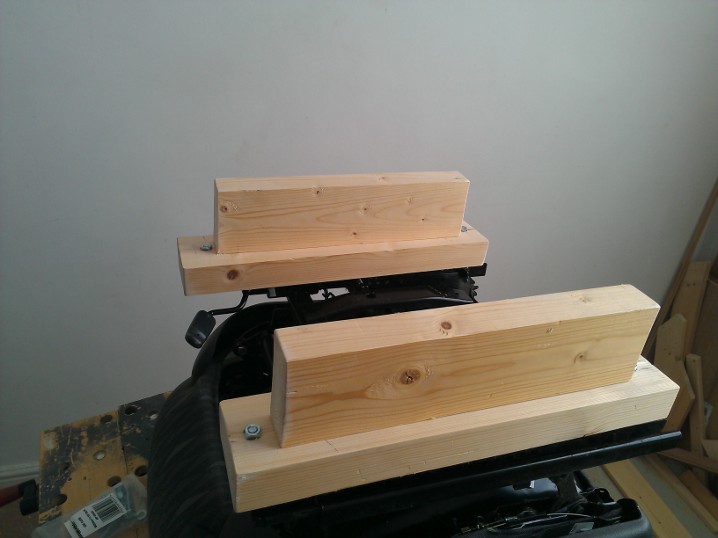 The rails are screwed together with several long screws for a deep hold, and the base likewise. This thing isn’t going to fall apart any time soon. Then I bolted the whole arrangement to the seat, turned it over, and bingo. One pilot’s seat. I made the base flat, rather than tilted – traditional cockpit seats usually have a tilt adjustment – because the Galaxy seats have a tilt adjustment built in, so I can still tilt the seat base back a few degrees if I want.

With a base screwed on to keep everything in line, the seat is done... for now

I was then able to use this to position the seat, the footwell, mark out the pedestal etc, and work out exactly how much room I have. Initial conclusions say not a lot – I figure I may just be able to squeeze past the shell on either side if I pull in my stomach – a lot. One thing that’s obvious is that my original plan to use the 180-degree swivel feature of my Galaxy seats to get in and out of the cockpit is a no-go – it simply requires too much room taking into account the diameter of the seat’s rotation plus the necessary room for a pair of legs. I’m now working on a fiendish plan for the whole ‘getting into the seat’ thing which I’ll share at a later date.

The captain's side seat, roughly in place, with footwell

I will now spend some time making a set of measurements for things like window height, overhead height etc, and use these to inform the next stage of my shell design.

I’m back to the slow and steady rhythm of the early days of the build. I’m losing every other weekend, but soon I may be able to start working evenings on electronics and other non-power-tool activities. All in all, it feels good to be back.