The weekend so far has been one of bits and pieces. I’m not 100% finished yet, but I’m taking a break so I thought I’d post this. I’ve gotten a couple of important pieces of work done, and plan to get a couple more done before the end of play today.

First up is the overhead shrouding. The front section beyond the vestibule needs some kind of covering, to keep the light out. I’m not doing any form of eyebrow windows a la Boeing, so all I needed was a simple cover. But the angles involved make that far from simple, and while I could probably sit down with a 3D CAD program and / or my vague memories of 3D trigonometry and work out the exact sizes of plywood or MDF to cut, I decided to go for a slightly simpler solution. Cloth.

Now this has a long and honourable history in aviation. In fact, if you look at most airplanes before the 1970s (particularly military aircraft), there’s often cloth covering up exposed metal surfaces in the cockpit. In the days when plastic was not so easy to produce or work with, and dimensions not quite so precise as they can be today, it made sense to do this. Cloth panels could be easily removed for access to what lay underneath, were easily cleaned or replaced, and helped insulate the pilots against the cold. While today you would simply put in a vacuum-formed plastic or fibreglass panel with insulation behind it, you can still use cloth to good results, as I discovered after a bit of experimentation.

A while back I bought a job-lot of white curtain liner cloth. If you’re unfamiliar with this, it’s basically a dense cloth that lets in no light, reflecting it entirely from one side and absorbing it on the other. You put it behind curtain cloth, which – however dark – is unlikely to be light-proof, and it stays dark in your room until you decide to open them. It’s also used by a lot of AV hobbyists (myself included) for blackout cloths and projector screens.

My plan was to tack the cloth up to the wooden frame of the overhead shroud, and stretch it taut so it covers the angles and spaces precisely. This proved to be harder said than done. My first attempt was saggy and useless and I had to take it off. My second attempt was more successful. To attach the cloth to the wood you can use a variety of methods, but far and away the best is staples. You’ll need an industrial-strength staple gun intended to drive staples into wood, not a paper stapler. 10mm staples work pretty well for this job. Find a good place to start where you can tack up one corner of the material and then run it down the length of the beam (in my case I stapled it around the side of the first beam for good anchorage). Then follow the curves around, stretching out the material as best you can in each small area, before stapling it in place. Cut off excess material as you go. Repeat until complete. Sounds simple, right? Trust me, it isn’t.

So, having complete the left-hand corner shroud, it looks like this: 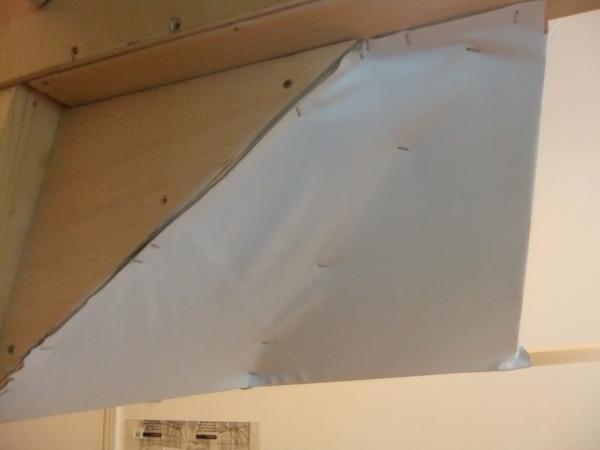 As you can see, it’s not perfectly taut. It may be theoretically possible to get it drum-tight, but in reality with complex angles and one person working on it, some degree of billowing is to be expected. You’ll be able to tell it’s cloth when it’s finished, but this isn’t going to be a major problem for my project. The lines of staples and the edges of the cloth will be concealed by wooden moulding strips, and under the edge of the window frame will go a second set of framing members which will provide the anchor point for the perspex I’m putting in there, which will cover up those edges too. The rough edges in the middle will be covered by the overhead panel, which goes in the remaining overhead space.

The left-hand shroud seen from outside

The right-hand side of the shroud went on with slightly more fuss and a little more dirt. The end result is still a bit billowy, but not so much as it was at first – I removed some staples and re-tightened the cloth in places.

Next step is to paint over the cloth with three or four coats of dilute PCV glue. This will cause the cloth to stiffen, shrink a little, tighten up, and provide a better surface for eventual painting, which is what will happen to it after the mouldings etc are applied. By the time I’m finished I’ll have a poor man’s fibreglass.

You may also note in the pictures above that I’ve been removing the window support pillars. The small wooden beams that were in there were placeholders only, and it’s time to put in the final members. Today I cut and put in the front pillar, which is now the sort of size and thickness you’d expect on a real aircraft. The interior portion of this will be foam-clad and covered in vinyl leatherette, like the glareshield cover. The side pillars remain out for the moment while I think about them: problematically, the shape of the window frame means that those pillars are in my forward view from the standard pilot’s seating position, and this is annoying and distracting. I’m considering leaving them off altogether and having a curved (or in reality, part-curved, part-bent) window that covers the whole 90 degrees.

There is precedent for this on some light aircraft, though not light jets, except for the Learjet which has a split canopy that forms a simple curve rather than a framed window. Some Cessnas feature bent glazing, but it’s probably not practical for an aircraft with a high altitude ceiling, as the glazing would likely not take the strain of the pressure differential and would shatter or blow out. But, since this is a ‘futuristic light jet’ sim, I can, if I wish, assume that glass laminate technology will have moved on enough to allow what I want. The acrylic sheet should bend easily enough with the application of hot air from a heat-gun, so it should be eminently doable without the need to bake the whole sheet in an oven. I haven’t made a final decision on this one yet, so look out for it in a future post. 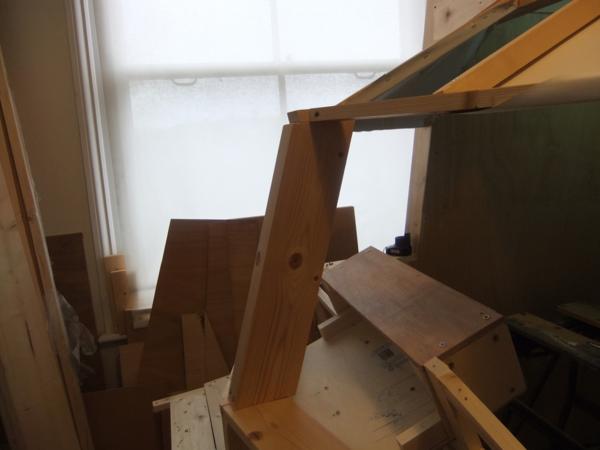 That’s it so far today. I’m rapidly reaching the point where the main shell construction is done, and we move on to the first finishing stage – things like windows, panel surfaces etc – and before I can do that I’ll need to have cleaned out the build room and done another junk disposal day. Before then I must construct the pedestal frame. That’s likely to be the subject of my next post.