So, this weekend I finished off the window framing that had taken over my life, and finally came to a finish that I’m happy with. The window posts consist of two pieces of 18mm x 44mm pine strip, cut and angled such that they present what appears to be a concave-shaped single interior post. Working out the bevels to cut, given the multiple angles involved – front window and side window rakes being 20 degrees and 12 degrees respectively – was a nightmare that I don’t recommend to anyone. A thorough command of 3D trigonometry would come in handy here. Sadly it’s been 20 years since I did 3D trig at school, so I basically just measured and fudged until I had the right angles.

Having assembled the posts in place using metal braces, I then squirted grab adhesive down the gap between them to both fix them together permanently and close up any small imperfections. Here’s the slightly messy result: 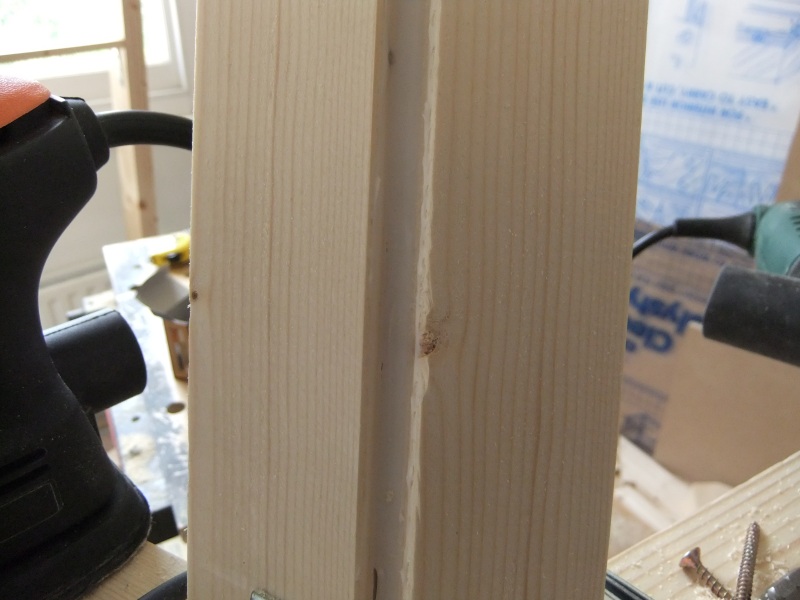 With the posts in place, I could then skip more messy maths by simply measuring the distances and angles, post to post, in order to cut the top frame. Mitre saw at the ready, I cut all the pieces and put them in place using simple screws into the mass of the posts. As the top frame doesn’t support any weight, this is fine. At this point I discovered that I needed to cut an angle greater than 45 degrees. My mitre saw doesn’t do more than 45 degrees, so in the end I just cut at 45 degrees and lived with a small gap. You can’t see it from the inside anyway, which is my standard for what is visually acceptable. The interior pilot’s side window view looks like this:

Although there’s plenty of detail work to be done to the windows, and I will soon have to disassemble the frame and rout grooves in it to fit the plexiglass windows, for now I turned my attention to another part of the built – the vestibule ceiling.

The enclosure divides into two main parts – at the rear is the vestibule, an area where a person can stand up straight and enter the sim. This is the area between the two a-frames at the rear. In front of this is the actual cockpit area itself, where the crew sit and, well, fly the thing. Eventually, the seats will slide back on sliders between the two areas to allow for easy seating – enter into the vestibule, pull out a seat, sit in it, and then slide forward into place to operate the sim.

All of the sim will be ‘skinned’ inside eventually – the goal being to let no external light in – and so I thought I’m make a start, and prove the concept, with the vestibule ceiling. This is a simple flat ceiling into which some lighting will be mounted later. Some bevelled panels will overlap the edges of the ceiling panels, hiding the mounting screws and the edge imperfections. The skin will generally be made of lightweight 6mm plywood.

First I cut new framing for the ceiling from 96mm x 18mm pine board, including two cross-members. Sadly my photos of this seem to have disappeared from my camera and I’d have to take it all apart to take new ones, so you’ll have to take my word for it. This whole structure then goes on top of the a-frames and bonds them together, replacing the temporary MDF pieces that were there before. I then needed to cut the ceiling panels themselves.

This gave me a great opportunity to try out my new Dremel circular saw attachment. Basically this is a mini-saw that can handle a max cut depth of 6mm. Crank the Dremel up to the right speed for the material in question and away you go. I found this much easier to keep on a straight line than my full-scale saw, despite the lack of a guard.

I cut two panels – my plywood source not being large enough to cover the space, which is 800mm x 800mm, in a single piece. In the final analysis, when these are filled, sanded and painted, no-one is going to notice. I then screwed these into the frame above to hold them in place and keep the surface nice and flat with no bowing.

Ceiling frame with panels in place

That’s all for this weekend. Next weekend I am going to put in place some more framing at the front of the enclosure to both hold the above-the-frame cladding in place, and also to provide a mounting frame for the overhead panel. Then some more internal skinning, and a big clear-out before starting on the MIP.

Here’s the whole enchilada so far… 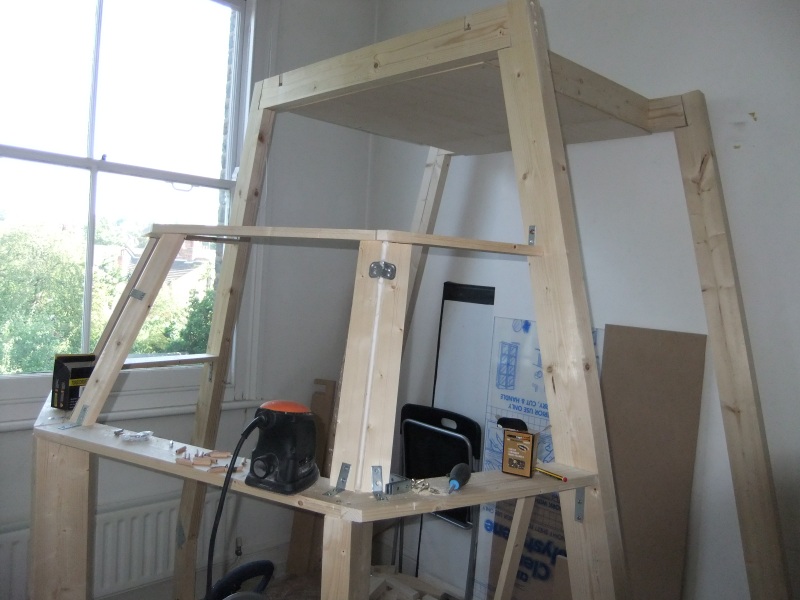