Having spent a while obsessing about the glareshield, I turned my attentions lately to the issues around the main instrument panel and the other control panels I’m going to have on the sim.

As this is first and foremost a glass cockpit project, there won’t be a plethora of buttons or guages on the MIP itself, but there will still be a number of panels to be created, including lighting control, MCP, EFIS, radio control etc. From the beginning I decided that I wanted my panels to be backlightable for that genuine airliner effect. While most airliners have panel lighting that will cast light down on the panel from under the glareshield, they will also have backlit panels for when those lights are off.

In the real thing this is generally done by putting a thin plastic overlay onto a metal substrate with holes milled out behind the lettering; a light source behind the panel then shines through, illuminating the light (usually white) letters over the dark background of the plastic overlay itself.

Unsurprisingly, the process for making backlit panels in a sim is similar. Some builders who have access to metalworking equipment and the wherewithall to make or have the vinyl / plastic overlays made for them do it the ‘real’ way. Those that haven’t need to make do. One of the best DIY solutions I’ve seen is that employed by Hans Krohn, described in more detail here. In summary, he uses a plastic sheet as a substitute for the metal, and on top of this layers several sheets of laser-printed transparency.

Transparency paper, which is normally used to create overhead projector transparencies, takes toner as with normal paper except for the white component, which remains transparent. The effect is that anything printed in white comes out see-through. Unfortunately, laser toner is not dense enough for a solid colour or black to be light-proof on a single sheet. You need three or four sheets, identically printed in black (where light should not show through) and white (where it should); these then need to be glued together precisely. If you then take a light source and put it behind the sheet, the transparent areas will be illuminated while the black will remain dark.

On top of this goes a normal printed sheet (I am using glossy photo paper for this step) featuring the full panel design. White is white on this, but the layer is so thin that in darkness with a light source you still see the white areas clearly lit. Finally, on top of that can go either a further transparent layer or possibly some form of varnish or finishing to give the surface texture required.

This is what Hans’ completed EFIS panel looks like when backlit:

Very professional, I think you’ll agree. As part of my early tests for my project, I created a backlit panel demo using – as I originally intended to use – nylon cutting board material as a light-diffusing base, and using similar techniques to Hans. 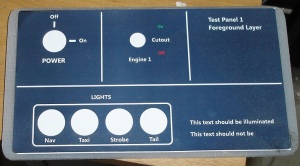 Lighting this from behind with the strongest point light source I could find – an LED torch – shows that the principle works, but the backlighting is too faint and local to be of much use; I’d need ton of LEDs just to get the thing working. This prompted me to switch to perspex as my backing material; an effect which can be simulated by removing the nylon backing and shining the torch light through the transparencies only. This is rather better. 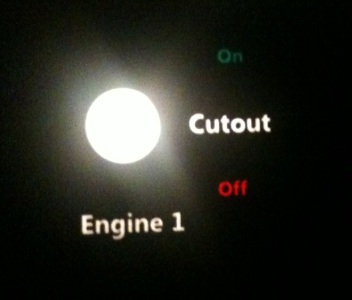 A backlit portion of the test panel

I’m using standard spraymount glue to hold the layers of transparency together – this provides good adhesion but can still be adjusted even days after initially being stuck. The collected layers are then stuck to the plastic backing using photo mount adhesive, which is pretty strong but very clear. I’m planning to build a second test panel and put this in place on the glareshield together with a lighting board. More on that in a future installment.

This is a simple technique for building backlit panels that achieves good results. The finished panel is not absolutely convincing, but with the right finishing it can look very good and last for a long time.